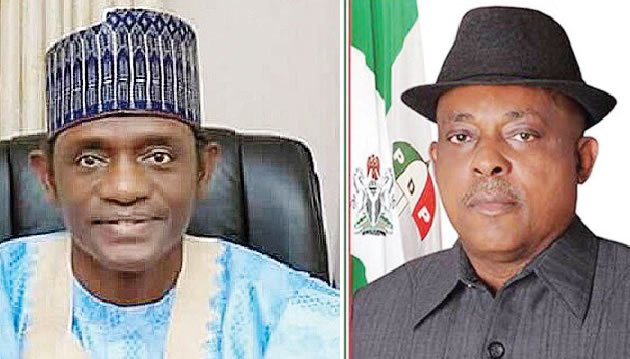 Ahead of 2023 presidential and general elections, the two major political parties in Nigeria, All Progressives Congress (APC), and Peoples Democratic Party (PDP) have been embroiled in deep leadership tussle capable of throwing them off balance and create a vacuum for the emergence of a third force.

As predicted, should both parties’ national leaders failed to rally around their members and put their entire house in order, the crisis rocking both parties may lead to the emergence of a new party that may come from nowhere to kick out both ruling and main opposition parties.

If allowed to linger on, the leadership tussle was said to be capable of opening a political lid in Nigerians’ eyes and further confirms the popular saying that both PDP and APC were siamese twins in terms of ideology, structures, and vision for the country.

While the main opposition chairman, Uche Secondus, was battling to retain his seat after protests and pressure from top members seeking his ouster became public, the ruling party national secretariat was taken over by heavily armed security operatives in an alleged move to prevent the ouster of the caretaker committee leadership.

The security agents that took over the party secretariat in an alleged attempt to prevent violent protests against the Yobe State Governor, Mai Mala Buni’s caretaker committee leadership of the party include officers and men of the Nigerian Police Force, Directorate of State Services (DSS).

Over the past few days also, state governors elected under both parties have been meeting as part of measures to find lasting solutions to the leadership crisis, and reposition the bodies as parties of choice for Nigerians, before, during, and after the 2023 elections.

Meanwhile, the APC caretaker committee Chairman disclosed that the security personnel positioned at strategic locations within the party secretariat located on No 40, Blantyre street Wuse 2, Abuja, were to forestall possible breakdown of law and order.

Buni, who spoke through the committee’s secretary, James Akpanudoedehe, said that the action had been taken to protect lives and properties in the party secretariat.

“The police is here to strengthen the leadership of Governor Buni, the caretaker chairman of the APC What do I mean by that? Whenever you read a security situation, when you have a security report that we are privy to, it is incumbent on our part to strengthen it so that we can protect you and the properties of APC,” he said.

“APC cannot be embarrassed because it has the national government. So we have to take measures to forestall any happening. We cannot underestimate security reports. You cannot play down on it. You have a security report, you cant take laws into your hands. You don’t expect us to call thugs to defend the secretariat of the party.

“So the right thing to do is to invite the police and the SSS who gave us the report that so so so thing may happen. It is a measure to protect your properties, including your lives. You are media people. If there is a protest and somebody is being killed, that would be big news. Nobody wants that that somebody has been shot here. It is our responsibility as managers of this party to put measures to protect lives and properties,” he said while briefing journalists on Monday.

Also, Secondus disclosed that he would not be succumbing to pressure from the party’s top members and that no amount of protests would make him resign from his position.

He explained that rather than succumb to pressure, he would continue to work for the development of the party and reconcile all grieving party members to ensure unity and positioned PDP as a party to beat before, during, and after the 2023 elections.

“The National Chairman of the Peoples Democratic Party, PDP, Prince Uche Secondus has said that he will not resign his position. Prince Secondus said in a short statement from his media office that nothing so far warrants his resignation from the party position and those tiny minority calling for his resignation should come clean and tell party members across the country his offense why he should resign. He said he will remain focussed and committed to the ideals of the party which he swore to protect and defend upon his election to lead this great party 44 months ago,” he said in a statement by his spokesperson, Ike Abonyi, on Monday.

Meanwhile, the meeting of governors elected under the PDP on Monday failed to resolve the fresh crisis pitting Secondus and top members of the party against each other.

Addressing newsmen at the end of the meeting, Sokoto State governor and chairman of the PDP Governors’ Forum, Aminu Tambuwal, expressed the readiness of the governors to continue the meeting until the party’s crisis was resolved.

“We discussed extensively on matters of the moment concerning our party and we have collectively resolved to continue to work together in unity. This meeting will continue tomorrow (Tuesday) with other stakeholders. Very soon, Nigerians, and indeed all of you, will hear our resolution. But we are working towards resolving all issues, as a family. By the grace of God, we are going to achieve that,” he said.

Also, the PDP House of Representatives caucus had during the weekend demanded the immediate resignation of Secondus and also urged the party leadership to save it from collapse.

“Formally asks the BoT and the Governors Forum of the PDP to ensure immediate and firm resolution of current challenges so as to enable a re-engineering, re-focusing process that would restore party members and millions of other Nigerians’ hope and confidence in the PDP as an alternative to the current dysfunctional, irresponsive and rudderless government of APC with its attendant suffering, miseries, political deceit, economic woes, insecurity and all-round disappointment foisted on favor millions of Nigerian families across the federation, and;

“Urge the current National Chairman Prince Uche Secondus) to consider making the necessary personal sacrifice worthy of a leader in the party’s current and future interest with a firm assurance of honorable regard and appreciation by the party leadership now and in years to come, by honorably resigning his position as party chairman immediately, to allow the party an early start,” the two-point resolution of the caucus read.

No fewer than seven members of the PDP National Working Committee (NWC) on August 3 resigned from their positions over alleged unfair treatment by the party’s national chairman.

The officers in different letters tendered before the party’s secretary argued that the NWC led by Secondus allegedly sidelined them in the daily activities of the party.