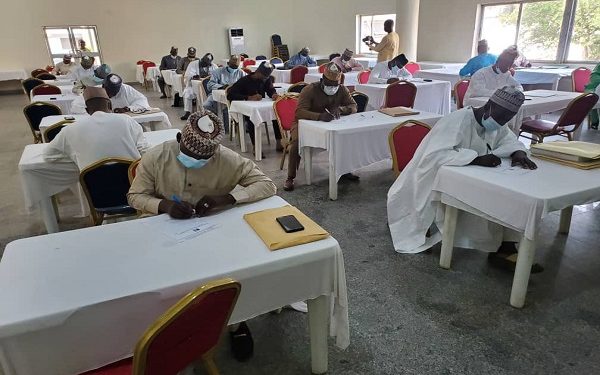 Unlike previous arrangements, the All Progressives Congress (APC) has subjected all its local government chairmanship aspirants to undergo written examination and oral interview in Kaduna State.

The chairmanship aspirants for the councils were made by the party to undergo the process to serve as a screening process rather than asking that they campaign across the party structures.

As gathered, the examination and interview that lasted for hours had over 100 aspirants participants and was supervised by a 17-man screening panel that includes four Professors.

It was also gathered the aspirants were told to write a biographical essay on their lives, schools attended, work experiences, and places lived or visited within Kaduna state, Nigeria, and abroad.

Aside from that, the aspirants were compelled by the screening panel to make photocopies of their credentials that were thoroughly scrutinise with probing questions to ascertain if they truly passed through the academic qualifications they possessed.

A member of the panel disclosed that the essence of the exercise was to weed out those with questionable credentials and deficiencies that have the tendencies of exposing the party to post-election litigations.

The actions of the panel have continued to generate commendations from Nigerians that believed the move would prevent the certificate falsification allegations that often trailed public officeholders and help to get the purpose of their aspiration.

The resident, who spoke on condition of anonymity, stated that the move would ensure that only competent aspirants get the party nod to contest for the poll in Kaduna.

He, meanwhile, urged that other states should embrace same to prevent the financial misappropriation that affected the development of local government across the state.

“On a personal note, I welcome the approach and wish that same be replicated by all governors, political parties, and what have you. By doing so, numb-skulls will dread waking up from their sleep to print posters and begin to make jingles all over the place, when in fact they lack what it takes to represent”.