LASG puts night clubs, lounges, others under lock for… 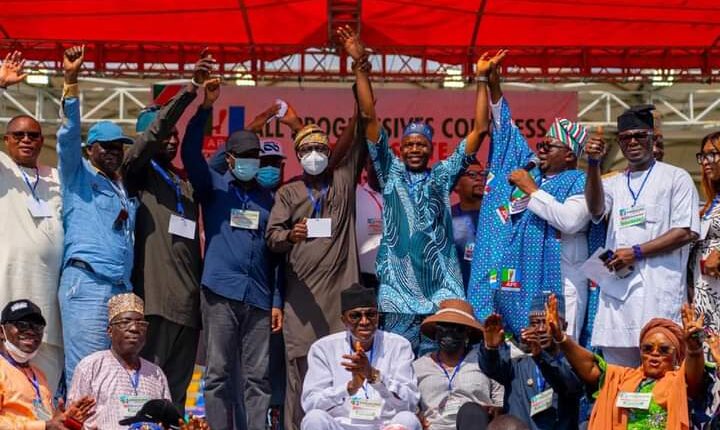 The internal crisis rocking state chapters of All Progressive Congress ( APC) has further deepened, as factions that emerged earlier in the year within the party held a parallel state congress, putting to question the dominance of the national leader of the party, Bola Tinubu and other leaders claiming to be fully in control of their jurisdictions.

Aside from a few states, many conducted parallel state congresses and appointed members of the executives for their factions, and each faction claimed that the Caretaker/Extraordinary Convention Committee, led by Yobe State Governor, Mai Mala Buni, recognise them.

Aside from that, there were parallel congresses, gunshots and violence marred the exercise, bringing to the public notice the ongoing crisis crippling the unity within the ruling party across the country.

In Lagos, the new movement challenging the supremacy of Tinubu in the state, Lagos4Lagos movement, held a parallel congress as against the other that was attended by the State Governor, Babajide Sanwo-Olu.

Although the party leadership in the state adopted consensus for the election of the state working committee of the party, leading to the emergence of a former commissioner, Cornelius Ojelabi as the consensus chairman, the other faction, Lagos4Lagos movement, went ahead with its exercise, electing Sunday Ajayi from Agege Local Government as selected as chairman of the faction.

The new bloc in Lagos APC had earlier vowed to challenge the “hegemony” of the APC National Leader and former Governor of the state, Tinubu, and went ahead at the Airport Hotel in Ikeja for the parallel congress.

The Lagos APC faction had equally conducted parallel congresses in the ward and local government congresses which preceded the conduct of the state congress while Tinubu was away for medical treatment.

In Ogun, after the series of violence that characterised the State congress, the two major factions in the party succeeded in electing parallel officials.

The former governor, Ibikunle Amosun’s camp succeeded in electing Derin Adebiyi as its APC State Chairman, among other 35 party executive members, adopting consensus arrangement to elect the excos and affirmed by the delegates.

Those present at the gathering were the Minister for Mines and Steel Development, Olalekan Adegbite; the Senators representing Ogun East and West in the National Assembly, Lekan Mustapha, and Tolu Odebiyi; Ogun governorship candidate, Adekunle Akinlade.

The congress, which was earlier marred by gunshot and violence, was equally monitored by Gbenga Opaleye as the Chairman State Congress committee.

In the same vein, the State Governor, Dapo Abiodun, and his loyalists, who gathered at the MKO Abiola Stadium, with former Governor, Gbenga Daniel, former Deputy Governor, Adegbenga Kaka, and other APC members loyal to his group, elected Yemi Sanusi as the State Chairman of the party.

The Abiodun factional congress was conducted under the supervision of Wale Ohu through a consensus approach, even though some opposing aspirants withdrew from the contest.

In Kwara State, a faction of the party belonging to the Minister of Information, Lai Mohammed, in a parallel congress, announced Omolaja Bolarinwa, as the re-elected state chairman of the party’s faction while the group led by the incumbent governor, Abdulrahman Abdulrazaq, has elected Sunday Fagbemi as the chairman.

Also in Osun, the crisis rocking the party took a turn for worse as two factions of the party held parallel congresses.

The Ilerioluwa Group is the faction loyal to Gboyega Oyetola, Osun governor, while The Osun Progressives (TOP) has the backing of Rauf Aregbesola, the minister of interior and former governor of the state.

Both factions elected new party executives at different locations in the state. Gboyega Famodun was re-elected as the state chairman of the party as the Ilerioluwa Group held its congress at the Osogbo City Stadium.

The Osun Progressives, on the other hand, held its parallel congress at the Onward area of Osogbo, Osun state capital, and the exercise produced Rasaq Salinsile, as the chairman of the faction.

However, it was a different story in Kano as Department of State Service (DSS) operatives sealed off the Sani Abacha Youth Centre, the proposed venue for a parallel congress of the APC in Kano state.

The security agents, who turned back journalists at the gate of the centre, said they were given instruction to take over the place and stop any gathering.

They said they were told that the only recognised venue for the APC state congress was the Sani Abacha Indoor Sports Hall.

Earlier at the Sports Hall, Governor Abdullahi Ganduje had declared any other congress gathering across the state as illegal and that the Buni-led committee would not accept it.

Meanwhile, the security agents have fired multiple teargas to disperse the crowds that gathered at the Youth Centre, along Madobi road.

One of the teargas was fired into one of the shops opposite the centre where some of the supporters had sought refuge.

Some of the groups were heard chanting songs of praise in support of Senator Barau Jibrin, one of the lawmakers who had teamed up with former governor of the state, Malam Ibrahim Shekarau, to challenge the leadership of the party in the state and had asked the party’s national secretariat to cancel all the congresses held by the party’s state leadership.

It was gathered that the lawmakers and their supporters are gathering elsewhere to organise the parallel congress.