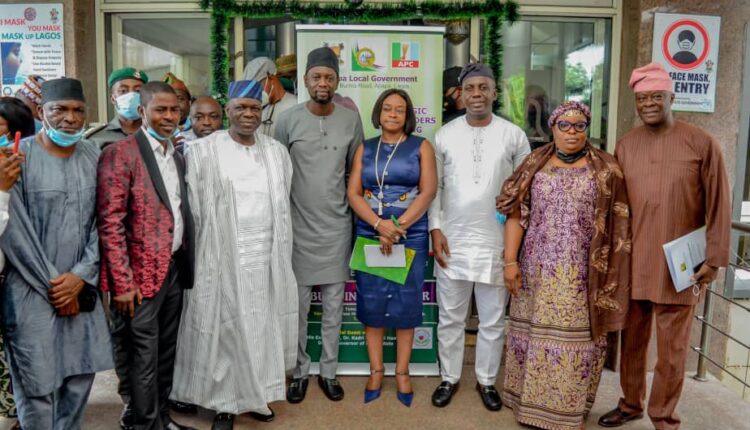 Share
The chairman of Apapa Local Government, Idowu Sebanjo, has disclosed that plans have been concluded to initiate a three-year master plan that would ensure the council is transformed from a Golden city to a Modern Port City that everyone could associate with across the country particularly within Lagos State.
Sebanjo said that the essence of this three-year transformation master plan, 2022-2024, was to give the council a clear roadmap that would be greatly followed towards achieving the 21st-century city that was already conceived.
The chairman, who disclosed these during a Strategic Stakeholders’ meeting organised within the council themed; Building Together, which was part of activities to mark the administration’s first 100 days in office, yesterday, explained that the meeting was meant to fashion out a Strategic Plan that will guide the operations and transformation of Apapa over the next three years.
The council, Sebanjo said, was lacking in a critical modern development with dwindling opportunities for innovative activities between the port and the community.

“The goal of the plan is to reposition Apapa into a 21″ Century Modern Port City. As identified stakeholders, you would agree with me that this council has suffered a gross reputational loss due to its many challenges, chiefly the incessant traffic menace and its perpetual poor environmental measures, which has led to an exodus of people and massive vacation of both homes and businesses in Apapa”, she added.

As a step towards achieving the plan, the council boss hinted that consultants from Alder Consulting and Rubric Strategic Consulting have been appointed to facilitate the process of communicating and fashioning out a clear strategic direction and plan for the next three years.

“To help us facilitate and guide this process and chart the journey to our achievements via a strategic blueprint, the Council has appointed a few consultants to facilitate the process of communicating our brand imperative by Alder Consulting and for fashioning out a clear strategic direction and plan for the next three years (2022-2024) by Rubric Strategic Consulting Ltd.

“I will like to stress that the Council is very serious not only about the meeting but also about our execution of the actions and the decisions to be arrived at. It is my duty as the Chairman of Apapa Local Government Area with the council of Executives and Legislative team to ensure that the strategic plans developed in this strategy meeting are swiftly and clinically executed”, she added.

Commending the stakeholders’ contribution to her administration, the chairman said: “I hereby acknowledge all of your hard work and resilience.
“I hoped that this laudable Strategic Meeting will seek to review the focus of our administrative achievements and success and provide new strategic imperatives and the strategic vision needed to transform Apapa into a 21st Century Modern Port City, despite unrelenting economic challenges and evolving community needs.

“In today’s world, port administrators need to be more strategic in their thinking to overcome present and future challenges, building internal operational efficiencies and ensuring that development extends to every nook and crannies of the Port’s neighbouring communities. Therefore, this administration’s strategic focus is geared towards the transitions and transformation from a Golden city to a Modern Port City that everyone will be proud of.

“This session, it is hoped would help us in this regard. It will X-ray both internal and external stakeholder contributions and help us to harness our collective commitment towards transforming Apapa into a 21st century Modern Port City”.

Earlier, the Deputy Governor, Dr Obafemi Hamzat, announced that the state government has commenced the removal and clearance of trucks parked indiscriminately along Oshodi-Apapa Expressway.
Hamzat, who was represented by Rasaq Amodu, added that the removal exercise commenced last Friday, to ease vehicular movement around the ports.

He said the major seaport in Apapa made it vulnerable to the high vehicular density that includes articulated trucks and tankers, saying the vehicles constitute major threats to the roads.

The deputy governor, meanwhile, commended the council chairman and described him as a visionary leader for bringing stakeholders in Apapa together to chart a common front.

“In an attempt to tackle these enormous challenges, the administration of Mr Babajide Sanwo-Olu has continuously partnered with the Nigerian Port Authority (NPA) and other stakeholders in the maritime sector to get the heavy articulated vehicles off the road permanently around Apapa axis and improve traffic along the corridor,” he said.