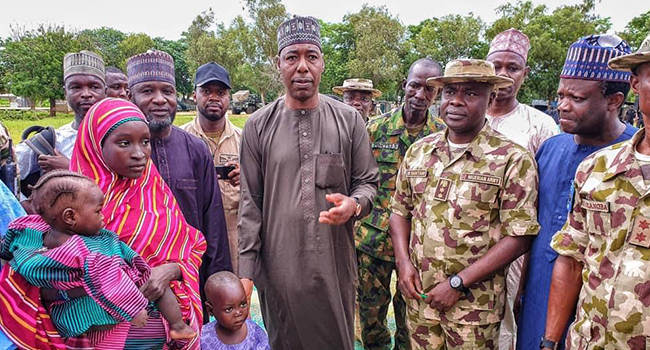 The Borno State Governor, Babagana Zulum, has taken custody of another Chibok schoolgirl, Hassana Adamu, after the Nigerian Army rescued her from Boko Haram fighters occupying the border towns between Nigeria and its neighbours.

Adamu, alongside her two children, were handed over to the governor for onward rehabilitation and integration into the society by the Commander, 26 Taskforce Brigade, Brig-Gen. DR Dantani.

Dantani handed over the schoolgirl and her children to Zulum on Saturday in Gwoza, increasing the number of abductees that have been rescued and reunited with their parents within the last 14 days to two.

Zulum was said to have visited Gwoza from where he later moved to Bama, undertaking humanitarian activities after a five-day visit to northern Borno where he engaged in humanitarian interventions.

READ MORE: JUST IN: Another Chibok Schoolgirl Regains Freedom After 7yrs In Captivity

Hassana and Ruth Pogu, who was rescued earlier, were among the over 200 schoolgirls abducted at a Government Secondary School in Chibok on April 14, 2014, by Boko Haram insurgents. 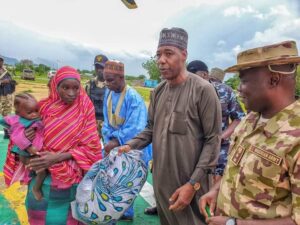 It would be recalled that Ruth Ngladar Pogu and a man said to be her husband had presented themselves to the Nigerian Army on July 28, 2021, at a
location in Bama.

The Chibok abduction in 2014 caused a stir worldwide, leading to calls for the return of the girls by global figures, including then First Lady of the United States, Michelle Obama.

Although a good number of the students have regained their freedom, about 100 were still believed to be in captivity of the insurgents while some were alleged to have been killed. 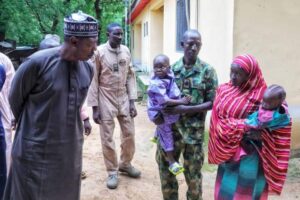 In April, seven years after the abduction, Zulum pledged to safely recover the remaining girls, saying “As a father of all sons and daughters of Borno, I haven’t lost hope that our remaining Chibok schoolgirls and other abducted persons will be safely recovered”.