As the rainfall continued across Lagos on Thursday, another building on 12, Hassan Adejobi Street, Papa Ashafa in Orile-Agege Local Council Development (LCDA) collapsed and left a mother and her daughter with varying degrees of injuries.

Also, atleast 20 families occupying three buildings within the community were currently displaced after their houses became flooded due to the downpour experienced in the council.

Earlier, dozens of occupants on 3 Sadiku Street, Alagba in Iyana Ipaja axis of Agege Local Government escaped death when a one-storey building collapsed and was said to have been a result of the downpour experienced in the state.

As gathered, the building in Papa Ashafa caved in at about 6:00 am, a few minutes after the rainfall started and that the house fence also went down after the flood took over the community.

Confirming the collapsed building, the Public Affairs Officer of Lagos State Emergency Management Agency (LASEMA), Nosa Okunbor, in a statement made available to newsmen, said that the buildings collapsed after it could not withstand pressure from the flood.

Okunbor said: “Upon the arrival of LASEMA officials at the incident scene, it was observed that a fence fell on a bungalow boy’s quarters with 6 rooms located in the same compound with 10 rooms bungalow that was submerged by water as a result of flooding.

“Today’s floods which collapsed a fence on the 6 rooms bungalow boy’s quarters, was also responsible for dislodging occupants of a 10-room bungalow domiciled in the same compound when it was submerged. 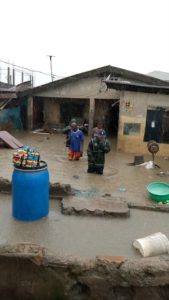 “It was further revealed to the Agency’s officials at the incident scene that 2 victims (an adult female and her female child) living in the affected building (boy’s quarters) sustained injuries and were taken to a hospital before arrival of the Agency’s LRT.

While confirming the displacement of families, he disclosed that a post-disaster assessment was conducted in the community and sensitized residents on general safety measures.