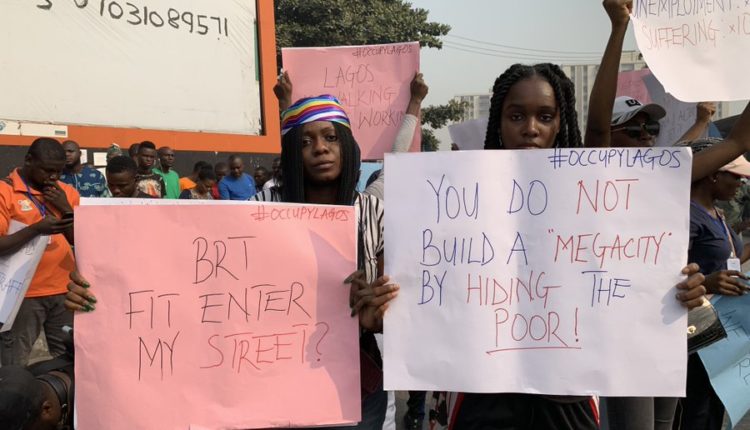 Activities at the 2020 Lagos City Marathon held on Saturday was marred by protest from hundreds of youths kicking against Government policy that restricted commercial motorcycle operators popular called Okada riders and tricycle operators also known as Keke Napep from plying some routes in the state.

The protest came days after government explained that their operations was not banned but restricted from some certain locations within the state.
Not minding the scorching sun, the protesters, who were youths stormed the venue to express their displeasure over implementation of the 2018 traffic law in the state.
According to the protesters, who were armed with placards, the restrictions on Okada and Keke Napep was already making life difficult for them.

Among the inscriptions on their placards are ‘fix bad roads, less traffic’, ‘metropolitan not treko-politan’, and ‘I have not been able to resume in my office at stipulated 08 am since Okada ban’, ‘We are tired of trekking’.

It was gathered that effort by the protesters to completely ground the annual sporting event proved abortive as security operatives deployed to ensure security of lives and property at the Eko Atlantic allegedly resisted the protesters from gaining access to location set aside for medal presentation.

Meanwhile, the Commissioner of police in Lagos State, Hakeem Odumosun, debunked the allegation, stressing that the law enforcement agencies were only concerned about providing security for Lagos City Marathon participants.

Odumosu, who was responding to questions from newsmen after the marathon, said that everything was in order, stressing that the police provided 2,000 men out of 5,000 security personnel deployed for the event.

He noted that no incident or arrest was made during and after the event.

“We have tight security. Everything is going on well. No incident has happened, no arrest made so far,“ he said.