JUST IN: Ebonyi Gov. shuts down offices, markets over aides… 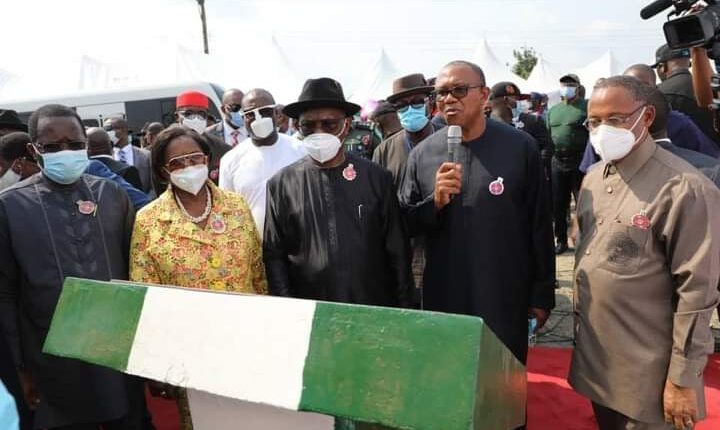 Anambra State former Governor, Peter Obi, has faulted the move by Federal Government to borrow N850 billion abandoned dividends from local banks to fund capital projects listed in 2021 budget, describing the move as a plan to mortgage the future of posterity.

Obi argued that the President Muhammadu Buhari-led administration had continuously borrow funds locally and internationally without any capital project tied to the money collected.

Obi, who challenged the apex government to showcase the capital projects that previously borrowed money were expended on, stressed that accountability in governance was the key parameter to measure the performance of any administration.

“Accountability in government is the most critical yardstick to determine good governance and to build the trust of the people. For recruitment into governance, competence capacity, and visible performance like we are seeing here today should be embraced.

“The reason why Nigeria is not working today is that people have been recruited based on sentiment and that has to stop because the country is collapsing.

“Every day you hear Nigeria is borrowing money, and when you ask they say it is being used for capital projects. Please, we want to commission those capital projects. Let them invite us to accompany them for the commissioning. So that when our children ask us about the borrowed money, we can point to the projects to answer them,” he added.

Obi, however, said access roads as provided by the River State Governor, Nyesom Wike, to the Isiopko people will increase the quality of life they live, enhance property value and reduce poverty.

Earlier, Wike, who disclosed that the central government has refunded to the State Government the N78 billion it spent on federal projects,

The governor the project was fulfilment of the promised made that the narrative of neglect of Isiopko people by the previous administration and has completed the rehabilitation of all their internal roads.

To further open up the place, he announced the award of contract for the reconstruction of the link road from Ogbodo to Isiodu, adding that his administration will rehabilitate all internal roads in Omerelu Community and the money to execute the work is already set aside.

The governor said the refunded money will be deployed in providing more critical projects across the state to further drive the efforts at enhancing the socioeconomic life of Rivers people.

According to him, even if it were his second tenure, he will continue to work relentlessly, for the interest of the state, and improve its stakes until it becomes what it should be.

“Rivers people, the Federal Government has refunded us the money. I have not touched a dim yet and it is in the bank. I will use it for project execution.

“I kept it to tell those who are making noise to know that I am going to work till the last day in office. I will continue to work for the interest of our people. I’m not resting.