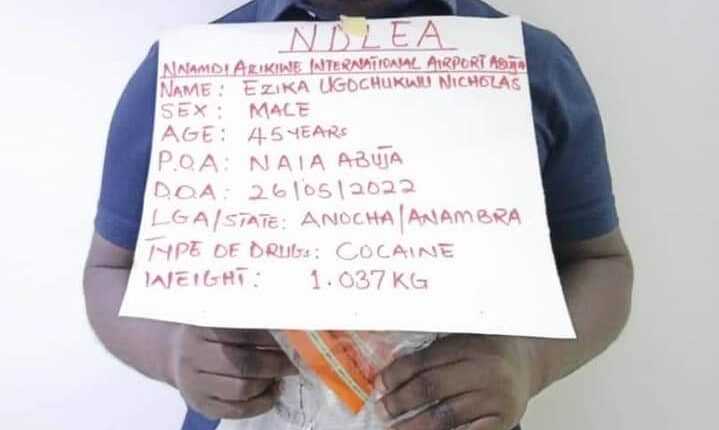 Ezika was said to have ingested the drugs on arrival from Addis Ababa on board Ethiopian airline before the the anti-narcotic agency apprehended him.

The suspect, who claimed to be into shoe business before his arrest was said to have travelled to Ethiopia on 23rd May on the invitation of the person who gave him the drug, which he ingested before returning into the waiting arms of NDLEA officers at the airport.

As disclosed by the agency’s Director, Media and Advocacy, Femi Babafemi, through a statement released on Sunday, in Abuja, efforts by drug cartels to export 4kg methamphetamine concealed in nylon rolls to New Zealand were also thwarted by anti-narcotic officers attached to a courier company in Lagos.

Babafemi stated that the NDLEA operatives had intercepted different quantities of cannabis sativa and Tramadol hidden in soles of slippers from being shipped to Oman through the same firm.

According to the statement: “Meanwhile, no fewer than 335,820 tablets of Tramadol, Exol 5, Diazepam and Rohypnol as well as 400 bottles of codeine syrup concealed in bags of vegetables have been intercepted in Abuja in a hummer passenger bus coming from Enugu on Monday 30th May. The bus driver, Augustine James, 35, is currently helping investigation.

In Imo state, 1,111kg of cannabis sativa heading to the Orlu forest, which has become a fortress for non-state actors, was intercepted on Thursday 26th May.”

On his part, the Chairman of NDLEA, Mohamed Marwa commended the officers and men of NAIA, and Lagos Commands of the Agency for sustaining the heat against the activities of drug cartels across the country.

He further urged them to continue in their doggedness towards ensuring that no stone would be left unturned in arresting more perpetrators.