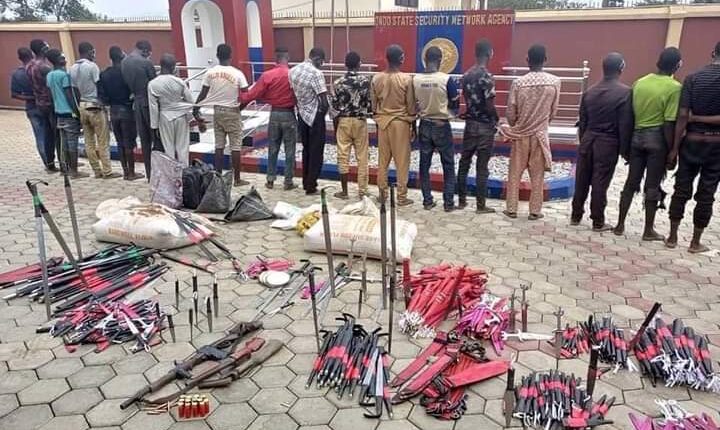 No fewer than 18 suspected bandits have been arrested and ammunition and others seized from them by the  Southwest Security agency codenamed Amotekum, in Ondo State.

The dangerous weapons that were concealed in bags of tiger nuts and under the seats of three buses and intercepted by the security outfit include guns, 500 pieces daggers, and different sizes of knives.

Their arrest is coming a few days after soldiers withdrew from checkpoints and inter-state boundaries across the state and the locations were taken over by the state security outfit.

Parading the suspects before journalists in Akure, the state Commander of Amotekun Corps, Adetunji Adeleye, said the three buses escaped from different checkpoints before they were arrested in Ondo town.

He said: “The suspects had escaped from various checkpoints after entering the state before their eventual arrest in Ondo town.

“Report as regards the movement of the bandits before entering the state-aided our operation. We got intel that a group of men are coming to invade the state, so we set out our monitoring devices.

“And precisely at about 1:30a.m. on yesterday, we saw three hummer buses that we had actually been trailing till they entered the state. They had a brief stop just before they entered the town and our men tried to stop them.

“They claimed that they were coming to Akure and the driver said somebody commissioned them from Katsina State, but that he doesn’t know the content of the bag filled with tiger nuts.

“On opening the bags, we found some guns, rounds of ammunition. And under the seats found about 500 different types and sizes of dagger and poisonous jack knives, cleverly concealed.

“When we asked them what they intended to do with the weapons, they told us that they were just given instructions to go and that further instructions will be given to them.”

Adeleye promised that the two other buses that escaped would be intercepted, while the suspects would be charged to court as soon investigations were concluded.