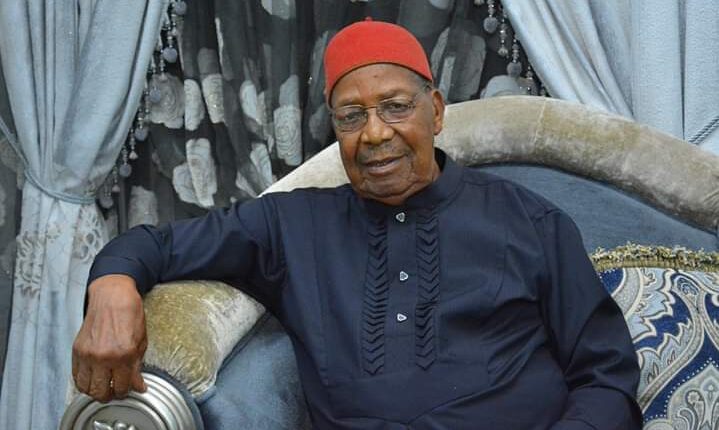 The life and times of Chief Mbazulike Amechi,  the notable nationalist who died yesterday, represented the heroic story of a generation that contributed immensely  into the making of Nigeria.  Aged 93, he hailed from Ukpor in Nnewi Local Government Area of Anambra State.

Amechi  was a member of the Zikist  movement, an organisation of youths inspired  by the first President of Nigeria, Dr. Nnamdi Azikiwe,  during the anti-colonial struggle.  Amechi later became aviation minister in the First Republic.

One of Amechi’s   last major interventions in public affairs was his leading a delegation of Igbo leaders to discuss a political solution to the matter  of the leader of the Indigenous People of Biafra (IPOB), Mazi Nnamdi Kanu. Unfortunately, such a solution seemed far to seek as at yesterday when Amechi died.

The essential Amechi, however,  was the young radical who along with other members of his generation made the struggle for national freedom their  career. The Amechi generation  dreamt of a just, united and prosperous nation. The youthful  nationalists performed the historic roles in the 1940s and 1950s, at a time many of them  were younger than some of those agitating for the sovereign state of Biafra, Odua Nation or any other separatist formation  today.

However, the roles of many of these anti-colonial nationalists  have not been sufficiently applauded. The matter is worsened in an age in which history is treated with  utter  contempt.

This point is well made by Amechi himself  in his 1985 booklet entitled  The Forgotten Heroes of Nigerian Independence as follows:

“It is not correct to say that Nigeria was granted independence by Britain ‘on a platter of gold.’ We fought for our independence and won. The battle might not have been as bloody and intensive as that of Rhodesia (now Zimbabwe) or Algeria  or Kenya; but we shed blood. Many youths and trade union leaders suffered unjust imprisonment, banishment and other indignities. Racial segregation or discrimination was deeply entrenched in Nigeria, but people fought to reverse the order. We now talk about ‘sharing the national cake.’ Whether the cake is still there or has been badly dismembered by rats, we hardly ponder for a moment that the recipe for the cake was gathered with the blood and sweat of some nationalist heroes some of whom have bowed out to commune with our ancestors…

“I am in position to testify that none of the eight governments (as at 1985) we have had since independence has done anything to show a simple appreciation of the role which these gallant Nigerians played in our struggle for nationhood.”

Amechi  lamented that when two of his comrades – Raji Abdalla and Oged Macaulay-  died they were virtually unsung by a nation that couldn’t identify its genuine   heroes.  He said successive governments had failed to honour the memories of the youth that fought for independence.

The story of the  Amechi generation is also a proof  that the role of the  youths has always been central to the evolution of the Nigerian nation. So there is no point making a fetish of age.  Of course, age is biologically a dynamic thing. Nigeria has been built since the colonial days largely  with the energies of youths. At various stages of the nation’s history,  relatively young people have determined the direction. Here we are talking persons in their 20s and 30s.  May the memory of the great sacrifices of the Amechi generation inspire the contemporary youths to embrace nation-building based on social justice.