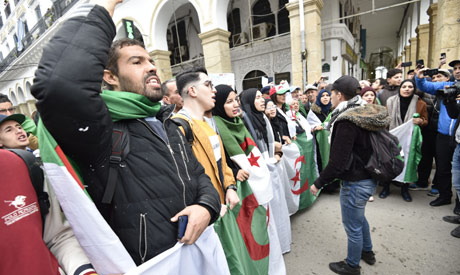 Barely a month before the Algerian Presidential election, a court in Algeria has sentenced 21 protesters to six months in imprisonment for engaging in actions that undermined the country’s national unity.

The verdict by the court in central Algiers also included additional six-month suspended sentences for the protesters, who were arrested for raising a flag symbolising the country’s Berber minority.

Berbers, especially in the Kabylie region east of the capital, have sought more rights to promote their culture and language, but their yellow, red and blue flag is banned as threatening national unity.

During the early stages of weekly mass protests that broke out in February, some demonstrators waved the flag alongside the national one, but police began arresting them for this during the summer and it is no longer seen at the marches.

President Abdelaziz Bouteflika resigned on April 2 but protesters continued to demand the removal of the ruling elite and the prosecution of people suspected of involvement in corruption.

The army is now the main player in Algeria’s politics, and its chief of staff, Ahmed Gaed Salah, has pushed for an election and has supported the detention of some former officials on graft charges.

But Gaed Salah has also warned against raising the Berber flag, saying it is a threat to national unity. The country’s constitution recognises the Berber language, Amazigh, along with Arabic.

The Algiers court on Tuesday also delayed issuing verdicts against 20 others protesters facing the same charges, including 11 held under arrest, until Nov. 18.

Protesters have rejected the Dec. 12 presidential election, saying it will not be fair as some of the old guard, including interim president Abdelkader Bensalah and Prime Minister Nouredine Bedoui, are still in power.

The army has repeatedly vowed transparency for the vote in which five candidates will run, including two former prime ministers.