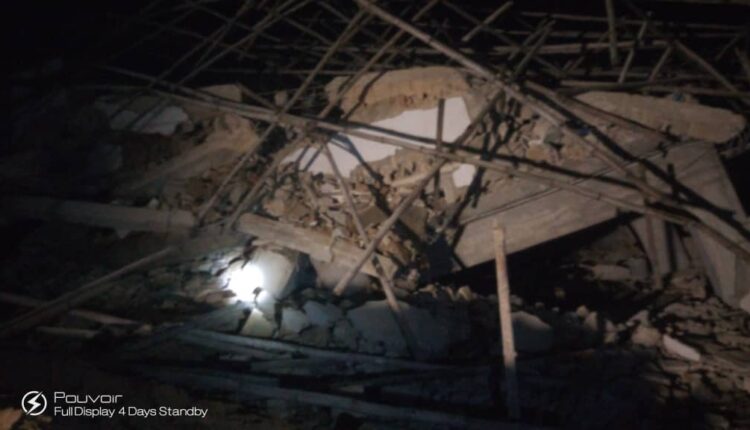 Share
Following an increase in death toll at the collapsed four-storey building to two, the Akwa Ibom State Government has commenced investigations to ascertain reasons behind the tragedy that occurred in Uyo, the state capital.
The State Government said that anyone found guilty after the investigations would be prosecuted in accordance with the law, to serve a deterrent to other property owners and developers as well as public servants that may be involved in the act.
As gathered, the directive to investigate the collapsed building on Iman street off Aka Road in Uyo, was issued by the State Governor, Udom Emmanuel, after the death toll increased in the state.
The Commissioner for Information and Strategy, Ini Ememobong, disclosed the ongoing investigations on Sunday through a statement made available to newsmen in Uyo.
Ememobong, who disclosed that the governor was not angered by the development, said that he has directed the Commissioner for Works and Fire Service not to limit the investigations to the Ministry alone, but rather to immediately set up a Panel of Inquiry to investigate the unfortunate incident.
The ongoing investigations came barely 24 hours after the building under construction suddenly caved in on the construction workers putting finishing touches to their work for the day.
According to the statement, following the unfortunate incident of the collapse of a four storey building on Iman street off Aka Road in Uyo, our state capital, HE the Governor, Udom Emmanuel has expressed his deepest condolences to the families whose relatives were trapped and eventually died in the collapsed building, while wishing the survivors a quick recovery. He has directed the Commissioner for Health to immediately take over the management of the survivors.
“Consequently, the Governor has directed the Commissioner for Works and Fire Service to immediately set up a Panel of a Inquiry to investigate the unfortunate incident. The panel is to conclude its work within one month, and if it is found that the collapse of the building was as a result of any acts of negligence or wrongdoing, those responsible will face the full wrath of the law.
“The Governor also expressed his sincere appreciation to all the first responders, rescue and security agencies, Government Officials, voluntary organizations and all citizens who took part(especially the construction companies that donated their equipment) in the rescue operation which lasted many hours”.

27 die, 20 injure during auto-crash in China