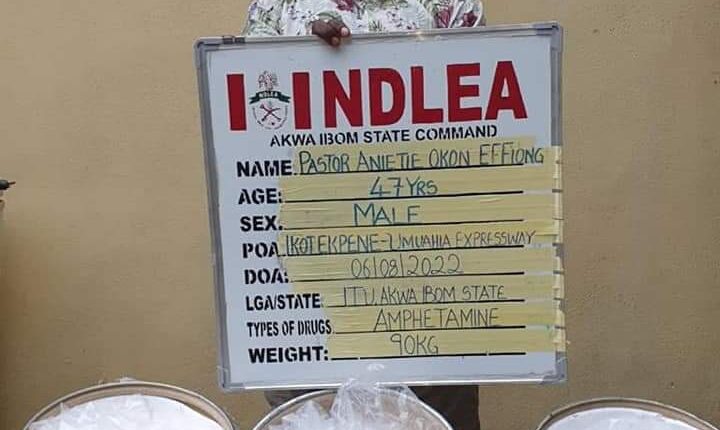 An Akwa Ibom cleric, Anietie Effiong has been arrested by the National Drug Law Enforcement Agency, (NDLEA) with three drums of crystal methamphetamine imported from India.

The consignment weighing 90 kilograms was said to have been intercepted during a stop and search operation along Umuahia – Ikot Ekpene highway on Saturday 6th August 2022.

The agency’s Director of Media and Advocacy, Femi Babafemi stated that the drug packed 30kg in each drum was meant for Effiong, who was arrested in a follow up operation at Oron beach in Oron.

According to the Spokesperson, the recovered Meth drums were meant for onward delivery to the Republic of Cameroon.

Babafemi in a statement released on Sunday, in Abuja stated that the arrest came on the heels of four seizures of the same illicit substance weighing 4.074kg going to Australia, Indonesia and Philippines with a 3kg cannabis sativa heading to Dubai, United Arab Emirates at some courier companies in Lagos.

He said that the consignments were concealed in body cream, hot burner iron and beads.

According to the statement: “In Zamfara, NDLEA operatives on Thursday 4th Aug intercepted a truck from Benin, Edo state enroute Sokoto with 50,000 tablets of Diazepam owned by a drug dealer, Umaru Attahiru, while in Kogi, 14 sacks containing 1,376 bottles of codeine based syrup weighing 190.4kg were seized along Okene-Abuja highway on Wednesday 3rd Aug.

“The exhibits were found in a delivery bus coming from Onitsha, Anambra and heading to Abuja. Follow up operation in Abuja same day led to the arrest of Jude Ikenna and Ozoemene Cornelius.”

On his part, the Chief Executive of NDLEA, Mohamed Marwa commended the officers and men of the Akwa Ibom, MMIA, Sokoto, Zamfara, Kogi, Delta, Enugu, and Kaduna Commands of the Agency for their recent feats.

He further charged them and others across the country to remain focused and vigilant.