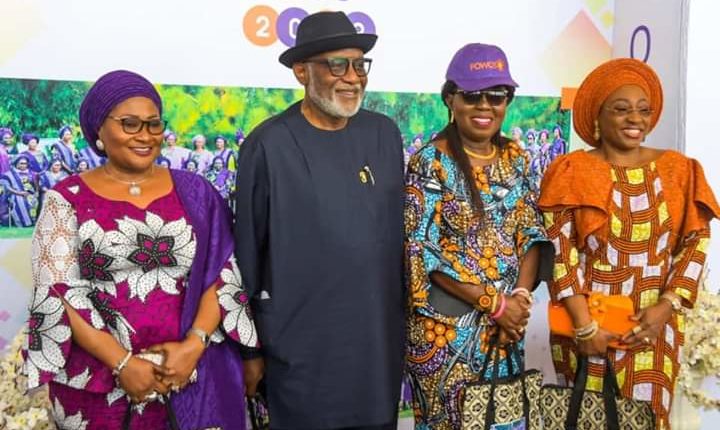 The wife of Ondo State Governor, Betty Anyanwu-Akeredolu, his Ekiti and Osun State counterparts, Bisi Fayemi and Kafayat Oyetola, have vowed not to relent until women are given equal rights as their male counterparts.

They spoke yesterday during 2nd summit of Forum for Wives of Ondo State Officials and Female Political Appointee (FOWOSO) held at International Culture and Event Centre in Akure.

Anyanwu-Akeredolu added that she would not relent to continuously join other women rights advocates to ensure women are globally treated with as much respect as their male counterparts.

She said: “The pursuit of gender quality is definitely daunting many rocks of stereotypes are particularly exerting, but when men join us, we are further strengthened to prevail quickly.

“But, whatever the case , we shall prevail,” she vowed .

According to her, FOWOSO, which is two-year old is proud of thousands of women that can now support their homes financially.

” We are proud of women that can now boldly speak for social justice, we are truly proud of the thousands of women that have been empowered by FOWOSO!

“I call them the FOWOSO army! Yes we are proud of how far we have gone,” she mentioned.

Akeredolu, who is the founder of FOWOSO, noted that her motivation was not because she is a woman but said that she sought a society where continuous development was achieved and sustained.

“We must come to the understanding that everyone, regardless of gender is needed for sustainable development.

“I have dedicated my life to driving gender equality, not because I love female folk more ,but because I seek the growth and advancement of humanity as a whole.

” I am very delighted to know that I have infected every FOWOSO member with this positive virus that strives for gender equality in every aspect of our socio-economic spectrum,” she explained.

The First Lady explained that it was no one’s benefits to suppress the abilities of women by denying them quality education, marrying them off against their will and silencing their mouths.

She berated any nation that could not give its women free access to operate, saying that statistics had shown that world economic giants were nations that had invested significantly in their human resources, females and males without bias.

The Ondo State First Lady said that the greatest error of Nigeria had been continuous denying of its womenfolk equal right to socio- economic privileges by upholding cultural norms and tradition that discriminated against them.

” Countless women have lost their lives to various kinds of diseases, breast cancer inclusive because they can’t seek health care if their husbands do not give them a go ahead. This is totally unacceptable and has to change. For crying out loud, this is their health we are talking about and not their husbands,” she stated.

Anyanwu-Akeredolu, therefore, highlighted some exact impacts of FOWOSO to include: skill acquisition in all 18 local council areas of the state, provision of empowerment items including medical intervention to cater for health need of women and children.

” I cannot but mention the role of FOWOSO in the fight against rape in Ondo State. Our efforts have not been in vain as more people are now aware that Arabinrin has zero tolerance to violence against women and FOWOSO women are always by my side and ready to take action whenever the need arises,” She said.

She, therefore, encouraged men to respect and love their wives and show their children that everyone had a role to play in the development of the home and the society.

In his remarks, the State Governor, Oluwarotimi Akeredolu, described as unquantifiable the training and empowerment of women in the state by FOWOSO.

Akeredolu said the activities of the forum particularly in the area of training and empowerment of women across the 18 local government areas of the state, had produced many entrepreneurs.

The governor said that he was a bit skeptical about the initiative at the beginning, noting that what the First Lady had taken women through in the last two years could be best described as a phenomenon.

Speaking on the theme of the summit; ”Prioritising Women’s Health & Well Being In Nigeria”, Akeredolu said his administration had prioritised the well-being of women in the state.

”We have prioritized women health and well-being in Ondo State and that was what led to the Abiyamo Maternal and Child Health Scheme which we launched yesterday. All you need to access the free health care for pregnant women is your residency cards. Every child under 5 is entitled to free health care in Ondo State.

”Let me commend the efforts of the founder for this laudable initiative geared towards the development of womenfolk in Ondo State,” Akeredolu stated.

Earlier, the Chairman of 2nd FOWOSO Planning Committee, Mercy Femi-Idris, described the forum as significant to health and welfare of women, adding that it was about nurturing and empowering female folks.

Femi-Idris noted that FOWOSO had recorded great success since its inception, thanking its founder and the state governor for supporting the forum.

Prof. Modupe Adelabu, the Chairman of the occasion, noted that FOWOSO had given women voice of recognition.

Adelabu, the former deputy governor of Ekiti State, said that the forum had eliminated discrimination against women, noting that FOWOSO was a fun-making gathering but a life- impacful organisation.

She, therefore, encouraged the participants to pick something meaningful and beneficial to their lives and the society.

The highlight of the event witnessed the presentation of 100,000, 50,000 and 25, 000 naira respectively to the winners of crawlers competition. While presenting the cash to the parents of these children, Akeredolu noted that the essence of the game is to bond as well as promote love and unity among families.

Opinion leaders and women advocates, trailed the audience with insightful notes on women’s health and well-being as a way of facilitating healthy living among the women folks.

Opportunities were given to the audience to express their views and ask questions as regard to health challenges after which solution were proferred by the renowned career and health activist.