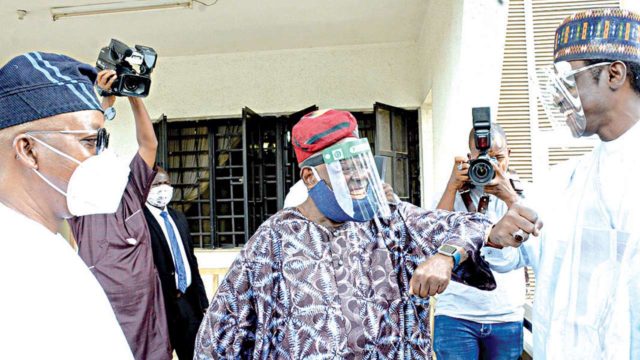 The Osun State former Governor, Bisi Akande, has faulted the All Progressive Congress (APC) caretaker committee for shelving aside the party’s membership register worth N1 billion that was put together in 2014 to capture details of every member.

Akande added that cancelling a register that was the first to be put together by any political party in the country less than 10 years after the exercise was an aberration on the part of the present leadership of APC.

He raised concerns on Wednesday during the party’s registration and revalidation exercise in his hometown, Ila-Orogun, and stressed that the original party register so created was the foundation of all the structures that stimulated the movements that pushed the inept and corrupt PDP out of power.

The former governor, who was the first chairman of the party, argued that the party’s caretaker committee led by Yobe State Governor, Mai Mala Buni, should have built on the successes recorded earlier rather than throw it away completely considering the cost implication of the new arrangement on APC’s purse when funds were scarce.

He argued that the previous register may lack the present-day technology but could have served as a bedrock for the present exercise geared towards strengthening the APC ahead of the 2023 general elections.

According to him, the register was used twice to install the present President Muhammadu Buhari administration into the Presidency of Nigeria; and, that preponderantly established the enviable hegemony of the APC party organizations and influences throughout Nigeria.

“The first major perception is that APC, already having a well-computerized register for an average of 100 leaders of similar ideological orientation per each of the more than 120000 polling units across Nigeria, might be lacking comprehension and matrix of the modern-day technology.

“A major perception is that APC leadership might be wasteful and unappreciative of the proper use of money in a kind of scanty economy in which election successes that the original APC register enjoyed since its completion on 15th February, 2014 and the over one billion Naira of 2014’s value that the original register cost when APC had no money of its own”, he added.

The inaugural chairman of the party, meanwhile, faulted the inauguration of Buni-led committee, describing it as an abnormality that could further cause disaster for the party in the future.

Akande noted that the solution to save the party from any further crisis was for the APC caretaker committee to resist all temptations of sit-tight syndromes that usually characterized most handpicked authorities in most underdeveloped countries of the world.

On the 2023 general elections, the former governor cautioned the party against complacency and to adopt all necessary strategies to ensure that the party provides a successor for President Muhammadu Buhari.

“I want to emphasize and warn that the next national election that would elect a successor to President Muhammadu Buhari is going to be the most important test of the ongoing APC membership registration and whatever structure being envisaged to be imposed on it. It is my advice and prayer, therefore, that every sense of responsibility should be selflessly employed to make these efforts ultimately result in success for our APC”.