JUST IN: EFCC extradites young entrepreneur to US over… 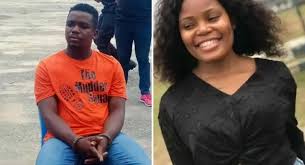 Umoren was said to have been a graduate of Philosophy in University of Uyo when Uduak killed her and she was on a job hunt while waiting for National Youth Service Corps (NYSC) mobilization.

Akpan, who invited Umoren for a job interview was said to have stood trial on two count charges of rape and murder.

Asides Akpan, the two other persons that stood trial in the murder case were said to have been Frank Akpan and Anwan-Bassey Akpan.

Frank, who is his father was charged with accessory after the fact to murder and Anwan-Bassey, sister of Akpan was charged with harboring her brother in her residence in Calabar in a bid to assist him to escape justice.

Meanwhile, the Court was said to have discharged and acquitted Frank and Anwan-Bassey after sentencing Akpan.

After the judgement on Thursday, in Akwa Ibom, the brother of the deceased, Ukeme Iniubong said that the family was happy that his sister has been given justice.

Ukeme urged government to support the family with jobs as a search for jobs led to the death of his younger sister.