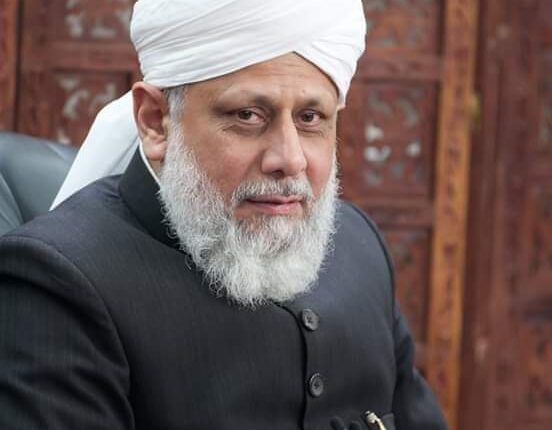 I pray that through the Grace and Mercy of Allah the almighty the current world crisis caused by the COVID-19 pandemic comes to an end as quickly as possible and that humanity may be saved from the short and long-term effects of the coronavirus as much as possible. In Nigeria, people have also lost their lives from this affliction and for this, I offer my deepest sympathies and condolences to you, your government, and all citizens of your nation.

As the worldwide religious leader of the Ahmadiyya Muslim Community, I am writing to you directly for the first time, though our Community has been long established in Nigeria and has a large membership. With the Grace of Allah, we have established Ahmadiyya Schools and Hospitals in your country, which are serving the local people, irrespective of their faith or belief, and, as a result, our Community is well known in Nigeria.

At an international level, with the Grace of Allah, the Ahmadiyya Muslim Community is now established in more than 210 countries and territories of the world and our objective is to spread the true and peaceful teachings of Islam.

In this era, according to the prophecies of the Holy Prophet of Islam (peace and blessings of Allah be upon him) a Reformer was destined to come in order to bring mankind back towards God Almighty and to draw the attention of human beings towards fulfilling the rights of one another so that peace and harmony be established across the world.

According to our belief, the founder of the Ahmadiyya Muslim Community, Hazrat Mirza Ghulam Ahmad of Qadian, India was sent to the world in fulfillment of the prophecies of the Holy Prophet of Islam (peace and blessings of Allah be upon him). Upon his claim, he announced that he had been commissioned by Allah the Almighty with two core objectives – to enlighten mankind of the urgent need to fulfill the rights of its Creator and of fulfilling the rights owed to one another. As you will no doubt be aware, Islam is the religion that has, more than any other, placed great emphasis on fulfilling the rights of God and of humanity.

The Holy Prophet of Islam (peace and blessings of Allah be upon him) stated that a true leader of a nation is he or she who serves his nation and his people with sincerity and humility. Certainly, the greatest service you can render to your nation is to imbue within the people of Nigeria a spirit of fulfilling the rights of God Almighty and of one another. Hence, it is my sincere request to you that, as President of Nigeria, you seek to instill these fundamental values within your nation.

Over the past century, the world has witnessed the frequent occurrence of various forms of natural disasters and the spread of deadly viruses. Certainly, the effect of the current COVID-19 pandemic has been unprecedented, causing scores of deaths globally and bringing much of the world to a virtual standstill. As we pass through such extraordinary times it is incumbent upon us to focus our attention towards Allah the Almighty, to fulfill His rights and of His Creation so that instead of incurring His Wrath, mankind may reap the fruits of His Love and Mercy.

As a direct result of the pandemic, lying ahead on the horizon is intense global economic turmoil and I fear that it could lead to nations, especially major powers, turning against one another and for hatreds and rivalries to boil over and erupt into warfare and conflict. When dominant and powerful nations become embroiled in war, even the lesser powers and developing countries are often engulfed by the conflict in some shape or form and so every effort must be made to prevent such horrifying circumstances from occurring.

I believe that Africa has an important role to play in the world’s future peace and prosperity, and as the continent’s largest country by population, Nigeria can and should play a major part in this effort. If warfare does break out in other parts of the world, the African Continent should try its utmost to save itself from participation or involvement so that it can be said that at least one part of the world remains peaceful and secure and a continent where human values are upheld and the rights of Allah the Almighty are fulfilled.

Certainly, if the people of Nigeria and the Government discharge their responsibilities with honesty and sincerity, and fulfill the rights of their Creator and of one another, and forever uphold the principle of absolute justice, I firmly believe that you have the capability to become one of the most developed countries in the world.

Indeed, you and the other African nations together, have the potential to lead the world.

May Allah the Almighty grant you the ability to fulfill your duties as President of Nigeria in the best way so that your nation and people may prosper.

With best wishes and prayers,