US, Russia swap prisoners in Turkey 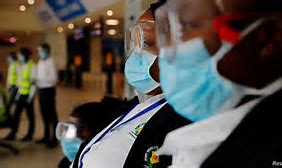 Thousands of African students in China’s quarantined Hubei province, epicenter of coronavirus outbreak, have urged leaders of their countries to emulate United States of America, France among other countries that have evacuated their citizens after outbreak of the deadly virus.

Many of these African countries, however, have disclosed that they lacked resources and wherewithal to control, treat and cater for the virus patients locally, while also curbing possibility of spread which would arise if coronavirus patients were let into their territories.

According to governments of these African countries including Senegal and Uganda, their stranded nationals were safer and better off in China, where authorities reported a drop in new cases of the virus, and where there was adequate access to preventive methods and successful treatment procedures.

It is worthy to note that outbreak of the virus, which occurred in Hubei, in January 2020, had since infected more than 74,000 people, resulting in over 2,100 casualties, in response to which many countries across the world had flown their nationals home from China, leaving majorly African students stranded, under lock-down, in crowded apartments, and with orders to stay indoors with windows closed.

The Guild gathered that governments across Africa had disclosed plans to send money to students, with aim to help with feeding expenses, such as Cameroon which had said it was sending about $82,000 to help its citizens stuck in Hubei, who disclosed that even one month after such promises had been made, help had yet to be received.

Margaret Namusisi, a Ugandan with children schooling in Wuhan, China, disclosed to newsmen that when her children had called to say they were being quarantined, because of the coronavirus outbreak, she had sent money and told them to run very fast and do shopping.

Namusisi stated that her girls were traumatized, and expressed her sadness that the Ugandan government seemed to have given up on its citizens in China, noting that she had become only hope for the children and their other African friends who were in same quarantine situations.

“I chat with my daughters and their friends every day on WeChat. They ask, “Has Uganda given upon us?”, and so far I have not been able to answer,”

Sources in China revealed that students from Cameroon, Uganda, Senegal and Ethiopia, as well as other countries, shared similar tales of frustration, in response to which their families set up pressure groups and associations with aim to force their respective governments to take adequate actions and bring the students home.