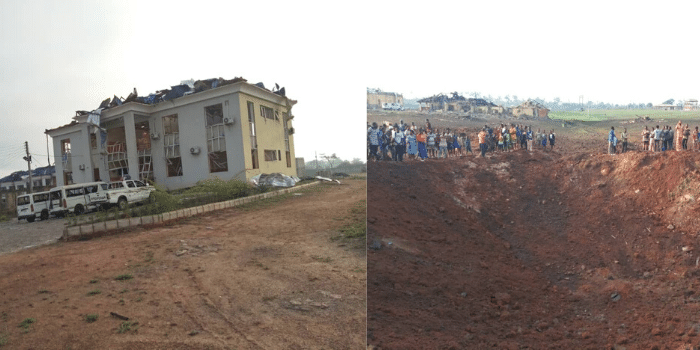 Worried by the number of Ondo State residents displaced and property destroyed after an explosion, Yoruba socio-cultural group, Afenifere, has demanded that the Government inaugurate a committee that inquires into the disaster that threw the entire state into a panic.

The organisation added that the inquiry should be in accordance with the Ordinance and Fiream Acts in order to further determine the type of ordinances that exploded in the state.

In a statement by its National Publicity Secretary, Yinka Odumakin, hours after the explosion on Saturday, the organisation commiserated with the state government and residents over the explosion that occurred on Akure-Owo road.

In its demand for an investigation, the organisation identified atleast four thematic areas that the inquiry must concentrate on in order to clear all doubt that had continued to trail the explosion.

According to Afenifere, the inquiry should unravel the identities of those transporting the ordinances, origin of the ordinances, the office that assigned the escorting policemen and under what circumstance and where was the destination of the Improvised Explosive Devices.

While expressing its displeasure over the rate of explosions in Yorubaland in recent times, Afenifere argued that all previous explosions have not been properly investigated.

“First was the blast in Ekiti State in early February with investigation blaming it on “human error”. This was followed by the massive explosion in Abule Ado in Lagos which was attributed to some spurious pipeline explosion which we rejected because the long-range impacts of that explosion could not have come from pipeline explosion.

“To date, we don’t know the owners of the articulated vehicles found on the scene of the Lagos explosion while the number of casualties and level of suggested damage done to Catholic-owned Bethlehem School suggested deliberate target of the explosion”.