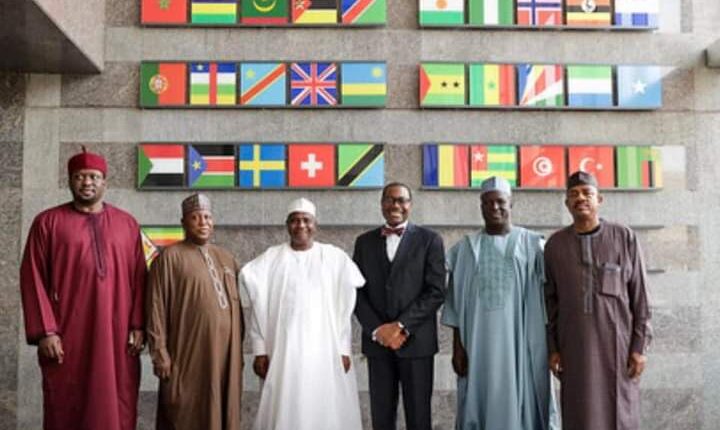 Share
After several months of feasibility studies, the African Development Bank (AfDB) has concluded plans to make Sokoto State the pivot of its women and youth economic empowerment in the Northern region of Nigeria.
AFDB said that the move which would result in the establishment of six entrepreneurship centers was basically to strengthen education and ward off terrorism and other crimes within the state and across the region.
The bank disclosed the plans during a meeting in Abidjan, the Ivory Coast capital, with a special delegation from Sokoto led by the state governor, Aminu Tambuwal, to discuss the developmental programmes.
Announcing the bank’s plan, the state Commissioner for Higher Education, Prof. Bashir Garba, hinted that one centre would be sited in each of the three senatorial districts while the three others would be located in tertiary institutions across the state.
Garba added that “the AfDB wants the state government to key into its array of programs targeted at empowering women and youths,” which includes: the Rural Microenterprise Flagship Program Model,” the “ENABLE Youth (Empowering Novel Agri-Business Led Employment) program,” “Agro-industrialization Pipeline Flagship Program Model,” and the “Skills Enhancement Zone Flagship Program Model.”
The commissioner further added that the bank wants the state to be part of its Technical and Vocational Education and Training (TVET) as well as the Affirmative Finance Action for Women in Africa (AFAWA).
He explained that “the AfDB wants Sokoto state to be a center of excellence in youth and women empowerment in Nigeria that will support small and medium enterprises (SMEs), especially those that will empower women,” the latter of which the bank said current capital access is available.
According to the commissioner, in specific terms, wants to put this state in vantage positions of being economic corridors from Northern Nigeria to other African countries.
In order to ensure that the thematic areas discussed by the Sokoto state government and the continental bank come to fruition, Tambuwal would participate in the bank’s flagship investment event- Africa Investment Forum, slated for November 2022.
The Forum, it was gathered, would serve as a platform to develop a model for agriculture and natural resources development across the state and later spread across the continent.
Speaking on the planned summit, the governor noted that the model to be developed would help greatly in transforming the economic landscape of Sokoto state.
The bank, it was also learnt, is keen on the development of an agro-cargo terminal and an agro-processing zone by the state. “To this end, the AfDB is set to make the state one of its focal centers, among the six already slated to benefit from it.