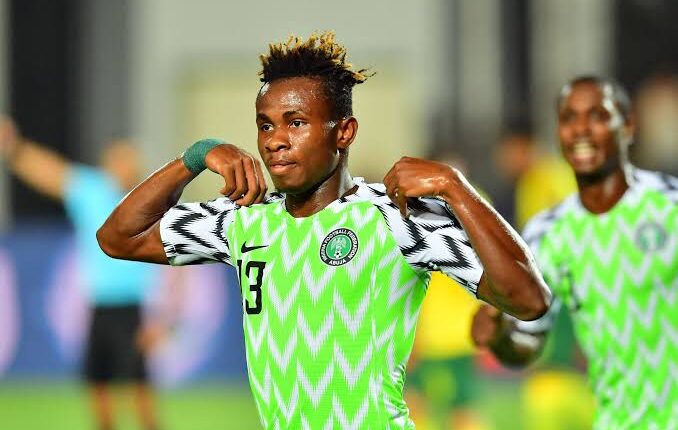 Mo Salah is my only headache in Egypt squad but the Pharaohs should be mindful of Nigeria’s Samuel Chukwueze who can also do as much as the Liverpool star boy.

Chukwueze made the La Liga team of the month a few days ago.

His club, Villarreal may not be as big as Liverpool, La Liga parades better football talents than English premiership but lacks the media hype .

Nigeria is going to this AFCON with unkowm stars, no doubt, this may work for the team.

In 2013, no one gave Stephen Keshi any chance to win AFCON, yet he used some greenhorns to prosecute the matches and won the cup.

Recall that Keshi managed to qualify from the group that had the defending champion, Zambia, the Super Eagles’ performance changed after beating the tournament favourite Côte d’ Voir 2-1.

As a matter of fact, the team return ticket was being processed before the match against Ivory Coast but Keshi surprised NFF and went on to win the cup.

The tournament exposed the quality of Ogenyi Onazi and crowned Emmanuel Emenike as the top scorer. Emenike was not in a top league at the time just like Sunday Mba, a local lad who eventually scored the tournament winning goal.

Recall that Nigeria beat Mali 4-1 at 2014 AFCON with unknown stars. Mikel Obi, Victor Moses and Vincent Enyeama were those we could easily pick as our stars then, just because they played in big leagues. Joseph Yobo had passed his prime at the time.

For me, Victor Osimhen’s injury, Odion Ighalo’s absence may be what Nigeria need to excel at AFCON. If the team can cut off Salah and beat Egypt, it may be difficult for any team to beat Nigeria. Salah is unassuming, unpredictable but very dangerous like Messi.

But Messi never found it easy with Eagles. If Eagles could hold Messi, Salah should not be invisible.

Senegal has built a new generation of super players, including his goalkeeper, Edouard Mendy, the squad will need character more than talents to win AFCON for the first time. Senegal 2002 squad was great but it lacked character to lift AFCON. It must be careful this time.

For Nigeria, the boys should just go and enjoy themselves and if the cup comes their way, they should pick it. Up Super.

Kunle Awosiyan is a journalist based in Lagos State, Nigeria.

Buhari’s elixir – Everybody must farm to save Nigeria