US dollar vs Naira: The Real Issues 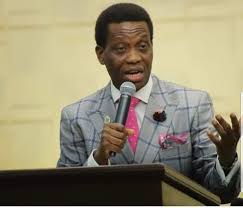 The General Overseer of the Redeemed Christian Church of God (RCCG), Enoch Adeboye, has announced that his deceased son, Dare Adeboye, burial would hold on Tuesday, May 11th, in accordance with the Coronavirus protocol in the country.

Adeboye, who described the demise of his son as a return home for rest, stated that he was consoled the life of selflessness and sacrifice made by the son while on earth.

The cleric, in a statement signed by his personal assistant, Leke Adeboye, commended everyone that grieved with the family over the 42 years old and prayed that they would all make it to that glorious home that had been the reward for every believer.

In the statement made available to newsmen on Friday, the general overseer hinted that the burial rites would start on Sunday, May 9th with a service at City of David Youth Church Eket, Akwa Ibom, where he performed his last missionary exercise and that it would end at the RCCG youth camp in Ogun State.

The statement reads: “Kindly find below order of programs for our beloved; Special service in City of David Youth Church Eket, Akwa Ibom. where he pastors on Sunday.

“Thanksgiving Songs and Tribute – Monday 10th May 2021, 4pm-6pm (RCCG House of Favour, Redemption camp) and farewell service at 10am. on Tuesday 11th May 2021 at the (Youth Centre, RCCG Redemption camp, Ogun State, Nigeria)”.

It would be recalled that Dare, before death, was the Assistant Pastor in charge of Region (Youth) 35 and died in sleep at his apartment where he had lives with his family.

Also, it was learnt that the cleric was said to have retired to his bed for rest but did not wake up at the appointed hour when his wife, Temiloluwa, seek his attention.

Before the tragedy occurred, the deceased, who was expected to celebrate his 43rd birthday next month, was reported hale and healthy as well as had officiated a session within the parish.