Tinubu: Will the visits lead to Villa? (Part 1) 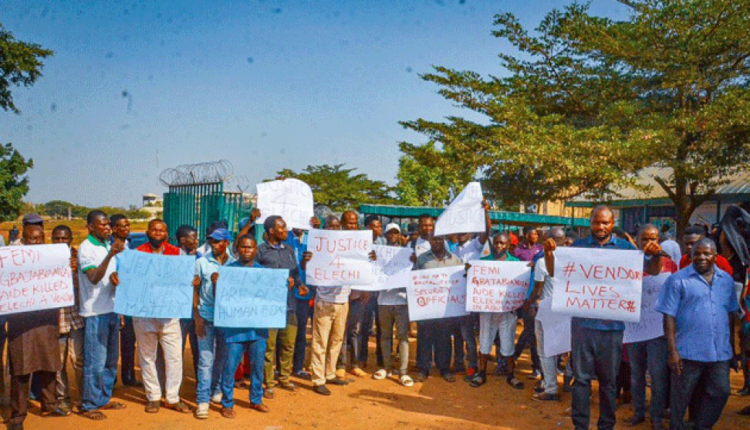 Dozens of newspaper vendors in Federal Capital Territory (FCT) Abuja, have taken to the street to protest killing of their colleagues, Ifeanyi Elechi, by a member of the speaker, House of Representatives, Femi Gbajabiamila, security aide, Abdullahi Hassan, and demanded justice.

The protesters, who were armed with placards bearing different inscriptions to express their displeasure over the death of their colleague, condemned the security aide’s action of shooting in the air to disperse youths that were unarmed.

As gathered, the inscription in the placards displayed by the protesters, who defied the scorching sun, on Friday reads: Vendor Lives Matters, Justice for Ifeanyi, Femi Gbajabiamila’s aide killed Ifeanyi Elechi and several others.

As learnt, the protest came hours after Gbajabiamila handed over Hassan, who shot a newspaper vendor, to Department of State Security (DSS) for prosecution for his actions.

The speaker, in a statement earlier, condemned the action and suspended him from his convoy to serve as a warning signal to others he would not tolerate any action that was in variance with the law.

According to him, Elechi was shot by a stray bullet, which was only intended to disperse a crowd while he was exchanging pleasantries with the newspaper vendors on his was out of the National Assembly.

“A horrible incident has taken place. This evening as I left the national assembly, I stopped, as usual, to exchange pleasantries with the newspaper vendors at the corner,” he explained.

“Many of them have known me since I first moved to Abuja and it was a friendly exchange. Unfortunately, after the convoy set out in continuation of the movement, unidentified men obstructed the convoy which got the attention of security men in the convoy who shot into the air to disperse them.”

The lawmaker narrated that some hours after they got to their destination, he was informed that the victim, identified as Ifeanyi had been hit by a stray bullet.

He said this was “contrary to an earlier report by men in the convoy that they applied their security discretion to shoot in the air. In the meantime; the officer who fired the fatal shot has been suspended from the convoy pending the conclusion of the investigation.”