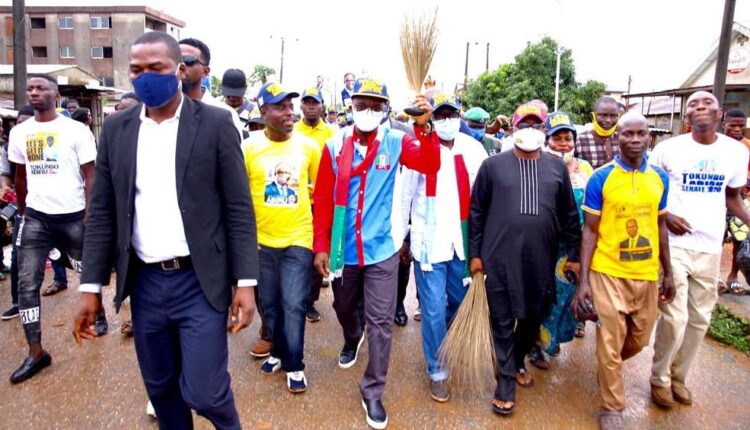 The candidate of All Progressives Congress (APC) for the October 31 senatorial bye-election in Lagos East, Tokunbo Abiru, has pledged to establish to set up an endowment to alleviate poverty and reduce unemployment within the district.

Abiru, a former Commissioner of Finance in Lagos State, added that with the fund, the needs of the indigents within the senatorial district would be addressed and emancipated from their predicament.

He gave the assurance during a meeting with stakeholders in Ikorodu Central Local Government Area (LGA) and Ikorodu North Local Council Development Area (LCDA) on the next senatorial bye-election in Lagos East.

At the meeting on Wednesday, the immediate past Chief Executive Officer of Polaris Bank, while responding to issues raised by the stakeholders, acknowledged the sorry level of poverty in the country, which according to him, could only be effectively fought from corporate, individual, and pubic fronts.

Addressing concerns raised by the stakeholders’, Abiru promised that after been declared by the Independent National Electoral Commission (INEC), efforts the funds would be set up to alleviate poverty and reduce unemployment in Lagos East, even in Lagos State.

Abiru, therefore, assured the people of Lagos East that his term at the National Assembly would be to prioritise residents’ welfare, just as he acknowledged the outstanding performance of all the senators that had represented the senatorial district.

The former commissioner disclosed that if eventually elected on October 31, the performance of the district’s previous senators would be yardstick the electorate would use to measure his own performance.

“The welfare of Lagos East will be paramount to me. The office of a senator is not an executive office, but I will work hard to lift up people from poverty and address their socio-economic concern through the instrument of legislation and lawmaking”.

On the road infrastructure, Abiru explained that he would take advantage of his relationship with the Minister of Works and Housing, Babatunde Fashola, and Lagos State Governor, Babajide Sanwo-Olu, to ensure the completion of ongoing road projects within the district and initiate new road projects.

“We will keep reminding the federal and state governments about the concern of the people in Lagos East. As the ongoing road projects are completed, we will prevail on the governments to initiate new projects and programmes for our people.

“That is why we have been advocating special status for Lagos as the cornerstone of my campaign agenda. There are a lot of facilities that are attracting people to Lagos after Federal Capital Territory (FCT) had been relocated to Abuja,” Abiru explained.