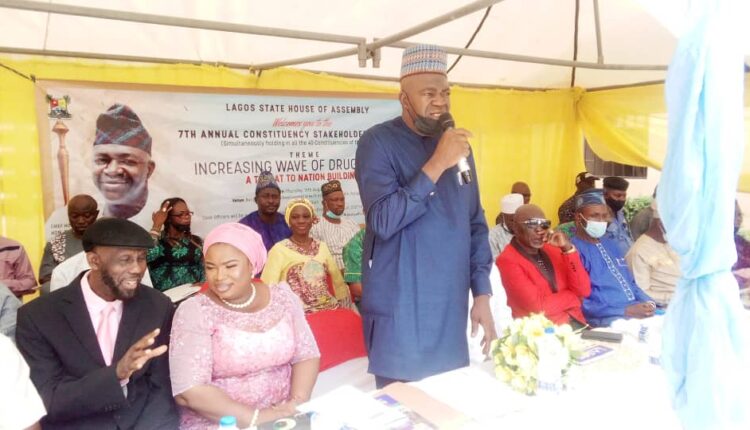 As a measure to prevent drug abuse spread, a member of the Lagos State House of Assembly representing Shomolu Constituency 11, Rotimi Abiru, has advised parents, religious leaders, Community leaders, and Non-Governmental Organisations (NGO) to support the Federal, States and Local Governments in the fight against drug abuse across Nigeria, particularly in the state.

Abiru, who decried the increasing rate of drug abuse among youths in the country, described drug abuse as a menace that cannot be solved by the government alone, saying we must work in concert with the government for the common good of the society.

The lawmaker, who spoke at the 7th Annual Constituency Stakeholders’ Meeting held at the Bariga Local Council Development Area (LCDA) secretariat, cautioned that there was an urgent need to checkmate the persistent abuse of drugs among the youths in other to ensure growth and progress of Nigeria.

He added that husband and wife should roll up their sleeves and team up, rather than separate, to nurture their children to become leaders that can take up the mantle of leadership in the future as well as become respected members of society.

Abiru further argued that some of the vices currently experienced across Nigeria were triggered by the abuse of drugs among the youths and that solutions to the challenges rest on the shoulder of all stakeholders to perform their duties effectively.

“Consequently, we call on all stakeholders, residents, parents, teachers, students, school proprietors, religious organisations, celebrities, social media influencers, professional bodies, the academia, civil society organisations, and community leaders to work in concert with the government for the common good of our society by saying ‘no to drug abuse trafficking.

“We need to understand that the increase in cultism could be attributed to drug abuse among youths. The solution to this is for parents to keep adequate watch of their children as well as prevent them from engaging in drugs.

“Also, the law enforcement agencies should not relent in their efforts towards a zero-tolerance on drug abuse, cultism and other vices that could affect the peace and Harmony currently experienced across the society.

Earlier, the Tutor-General and Permanent Secretary for Education District 11, Anike Adekanye, stressed that there was an urgent need for aggressive sensitization of youths, parents, and guidance on the impact of drug on addicts developments.

Adekanye, while arguing that the school cannot solely solve the challenges, urged parents and youths to do away with drugs, noting we all need to distance ourselves from anyone engaging in it.

Earlier, the representative of the Bariga Police Station, Onos Constantine, added that drug effects were often devastating and that they ruined careers as well as shatter all aspirations any parent could have on an addicted child.

Constantine added that the relative reduction in drug abuse recorded across Bariga was due to support the law enforcement agency received from parents, civil societies, and others.

The law enforcement officer noted that persistent counseling of parents, as well as their children and collaboration of with organisation, has helped to stem the tide in the council.