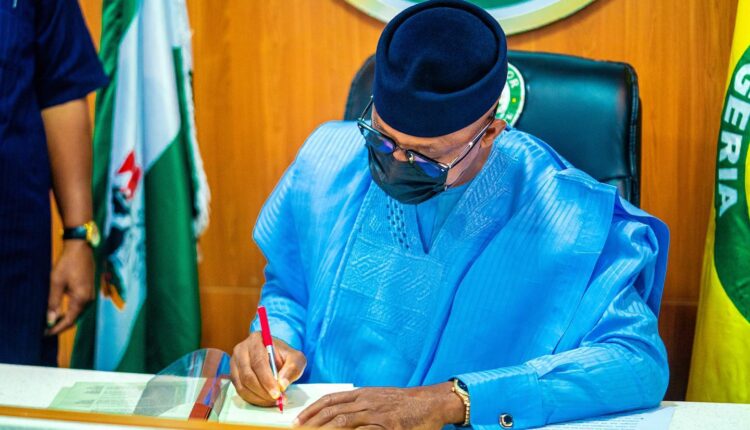 The Ogun State Governor, Dapo Abiodun, has signed the state’s 2021 Appropriation Bill of N338. 6billon into law with a promise to focus on citizens welfare and developmental projects among other areas listed as a priority in achieving inclusive growth in the state.

He indicated that the signed budget had been put together in line with his administration’s commitment to recover from the challenges occasioned by outbreak of coronavirus and forge ahead in the critical sectors of the economy as enunciated in the Act.

Signing the bill into law in Abeokuta on Wednesday, Abiodun reiterated his administration’s commitment to focusing on the implementation of the budget by coming up with programmes and policies that would ensure citizens’ prosperity.

He said that signing the budget before December would avail the state government the opportunity to further plan towards its implementation from January 2021.

“I am optimistic that the 2021 fiscal year will witness increased prosperity as envisaged in this Act. We will be able to get back to the desired levels of infrastructural and human capital development for our people and do a lot more.

“I pray that God will help us and this nation to rediscover ourselves and to commit every work of our people and our state and nation for the common good of all our citizens,” he said.

While giving the breakdown, the governor said that bill tagged “Budget of Recovery and Sustainability”, comprises recurrent expenditure of N162 billion (48 percent of the total budget) and capital expenditure of N177 billion (52 percent).

Abiodun explained that while passing the budget, the House of Assembly, on Tuesday slightly adjusted in the recurrent and capital expenditures estimates.

He noted that the adjustments affected about 74 agencies, including the capital receipt, following the recommendations of the House Committee on Finance and Appropriation led by Hon. Kunle Sobunkanla.