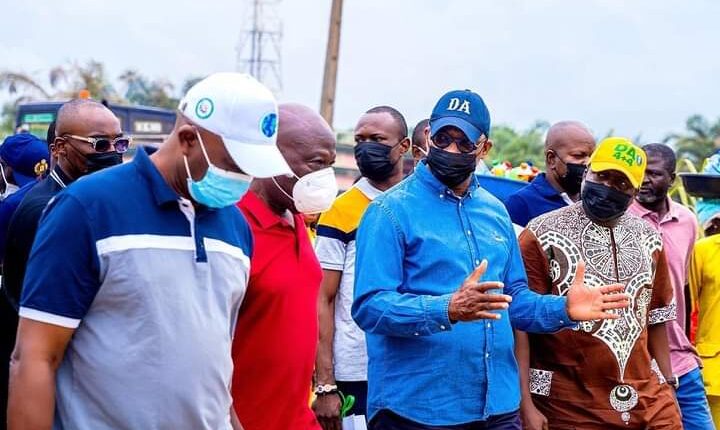 Concerned by the deplorable state of the Lagos-Sango Ota-Abeokuta road, the Ogun State governor, Dapo Abiodun, has declared a state of emergency on the road and issued a two-week ultimatum to the Federal Government, to rehabilitate the road for easy vehicular movement.

Aside from that, the governor has terminated the contract of the construction company handling the Owode-Ilaro road contractor over slow pace of work.

The governor gave the rehabilitation duration and sacked the contractor on Saturday when he led other members of the government to inspect the road and other projects currently under construction across the state.

In a statement released after the inspection, Abiodun lamented that the Lagos-Sango Ota-Abeokuta road had become a death trap and was already not too suitable for vehicular movement in the state.

According to the statement, during his inspection tour, governor declared a state of emergency on the Lagos-Sango Ota-Abeokuta Road and also stated that his administration is giving the Federal Government a 2-week window to intervene on this road.

“At it’s expiration, the Governor noted that the State Government would, putting the safety and comfort of its citizens first, have no choice but to immediately intervene through total reconstruction.

“The governor was also at the Owode-Ilaro Road where he was made to understand that the contractor handling the Owode-Iwoye end of the road, RAJCOM is not living up to expectations. Upon hearing this, Prince Dapo Abiodun immediately revoked their contract due to the slow pace of work and awarded it to CCECC who will now handle all the roadworks.

” Abiodun also inspected some sections of the Ojodu-Abiodun-Akute-Oke Aro-Agbado-Ijoko-Sango Road where he promised that workers will move to the site in the next three weeks so as to begin reconstruction of the deplorable road”.