Wike threatens to pull down hotels, others aiding cultists,… 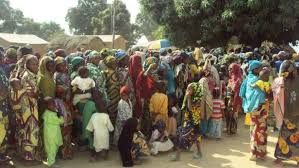 As the unrest in Cameroun intensified, atleast 8000 migrants from the war-thorn country have crossed into Nigeria, seeking for food, medical care and asylum to relieve them from the war trauma  after their long walk.

The United Nations Refugee Agency (UNHCR), who disclosed the number of refugees n Thursday, adding that more refugees were already en-route the country after discovering it is the safest place to seek asylum.

UNHCR further disclosed that the refugees, who fled Civil war zone between Cameroonian army and secessionist militants, were scattered between Eastern and Southern States of Nigeria.

The global organisation lamented that several refugees which include women and children, arrived Nigerian borders malnourished, and sustained gunshot wounds.

While commending the Nigerian Government for opening its borders to fellow Africans in need and stated that the new influx of 8,000 refugees had brought an estimated number of Cameroonian refugees in Nigeria to 60,000.

The U. N Agency said that Nigerians had proven their generosity by accepting their Cameroonian counterparts, affording them needed help, accommodation and means of livelihood, which had become succor to the refugees.

“The Cameroonian insurgency has, so far, resulted in deaths of thousands, with half a million people forced to flee their homes, trekking across savannah and forests to reach Nigeria,”

“We thank Nigeria for its show of leadership and sisterhood in allowing the refugees a home within its borders, and call for other African countries to emulate Nigeria’s strides in bringing unity to Africa”.