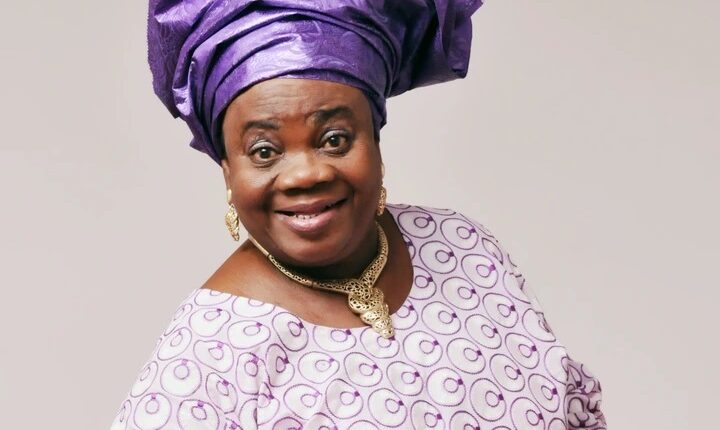 It was indeed a day of unexpected surprises for 70-year-old Nollywood actress, Lanre Hassan popularly called Mama Awero, when Lagos State Governor, Babajide Sanwo-Olu, handed over keys of a three-bedroom flat to the septuagenarian, to give her a permanent abode in the state.

The actress, who was reported to be battling with accommodation challenges, could not hide her joy on Wednesday after the governor handed over keys to the new apartment as a gift from the state to her.

Mama Awero, in an emotion-laden voice, expressed gratitude to the governor, describing the gesture as an unexpected gift.

“Anyone who is compassionate to offer his fellow human a comfortable shelter such as this deserves nothing but prayers. I am short of words. Governor Sanwo-Olu, you have put smiles on my face in my moment of despair. May Allah supports you and your Deputy,” the veteran actress said.

Also receiving house gift from the governor were two members of the State’s teaching staff honoured during national education awards for their quality services.

The two beneficiaries were the Principal of Government Junior College in Ketu-Epe, Dunni Ikuseyi (Principal of the Year) and the recipient of Teacher of the Year, Elusakin of Oriwu Model College.

At the ceremony, Sanwo-Olu explained that the choice of the actress was to recognise her contribution to the development of Nigerian entertainment industry and for inculcating morals in many youths across the country.

He noted that the recognition was to ensure that anyone that had contributed to the development of the country gets a reward for their service to humanity, saying, we do not want to recognise them after death rather, they should get it while alive.

The governor noted that the project was the fulfillment of the dreams and expectations of several Lagosians that aspired to have better accommodation in the state.

“The delivery of this estate should serve as a reminder that we will keep justifying the confidence of the people in our Government by fulfilling our promises. I am glad that the expectation of many Lagosians is being actualized today. I promise that more Lagosians will experience this feeling of accomplishment during the tenure of this administration.

“With the housing schemes being delivered in Ikorodu, we expect a population surge, which is why we have taken the holistic approach by revamping the socio-economic infrastructure in this axis. For instance, the rehabilitation of government-owned schools is being escalated to cater for additional students because the allottees will definitely need to enroll their children in school.

“I assure the good people of Ikorodu that we are poised to deliver more housing projects to accommodate the increasing number of people migrating to this part of the State. Already, we have earmarked the piece of land adjoining this Estate for another housing project.

“We have adopted the   Global   Housing Policy, which gives people the option of becoming homeowners, over a period of time through the Rent to Own policy. This policy, which is targeted at the working class (in the formal and informal sectors) promotes continued prosperity and decent living as beneficiaries pay only a percentage of their earnings as a mortgage on a monthly basis just like it is done in modern and developed economies”.