68 inmates die, dozens others injure during prison unrest in Ecuador 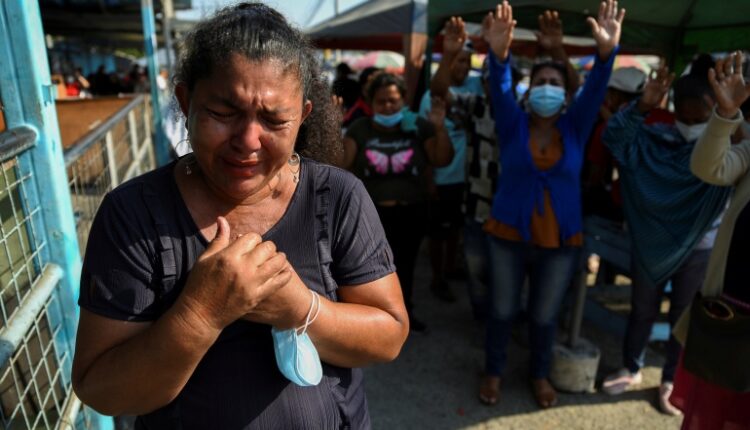 Atleast 68 inmates have been reported to have died and dozens of others sustaining varying degrees of injuries during an unrest within Guayaquil jail, barely one month after a riot resulted in the death of over 119 prisoners in Ecuador.

As gathered, the clashes started when prisoners tried to enter a section of the jail, firing gunshots and using explosives, and police were quickly alerted to contain the unrest before it escalate beyond the prison walls.

The riot that claimed the lives of the inmates was said to have started around 7:00 pm yesterday when one of the crime gangs within the prison tried to outshine the other.

To prevent further escalation, Police officers in riot gear were seen climbing up the blood-stained prison walls, while a body of an inmate in an orange prison jumpsuit lay on the roof of the jail encircled by barbed wire.

Meanwhile, scores of people gathered outside the prison gates, weeping and trying to learn the fate of their relatives inside the correctional centre serving their jail terms.

Confirming the unrest, Police commander General, Tannya Varela, through a statement released on its official social media handle, stressed that at least 58 inmates died during the clashes.

According to him, these events are the result of an aged-long territorial dispute between criminal gangs in the society that was extended to the correctional centre.

The governor of the province of Guayas, whose capital city is Guayaquil, Pablo Arosemena, stated that the quick intervention of the law enforcement agency.

Arosemena, who condemned the clashes, described face-off between inmates particularly those that led the unrest as the highest level of savagery and inhumanity to man.

Before this, more than 300 prisoners have been killed this year in Ecuador’s criminal detention system, where thousands of inmates tied to drug gangs square off in violent clashes that often turn into riots.

During the September unrest, one of the worst prison massacres in Latin American history, and the latest deadly violence in Guayaquil only reaffirmed the broken state of Ecuador’s jails.

Rival narcotics gangs have been waging a bloody feud in the Guayas 1 Prison, a facility that was designed for 5,300 inmates, but houses 8,500 — 60 percent more than capacity.

But even after a crackdown in the wake of the September 28 tragedy that killed 119, the unrest has persisted, with at least 15 more inmates dying prior to Friday’s deadly burst of violence.

Two weeks after the September disaster the country’s president, Guillermo Lasso, declared a 60-day state of emergency in a bid to tame Ecuador’s surging drug-related unrest.