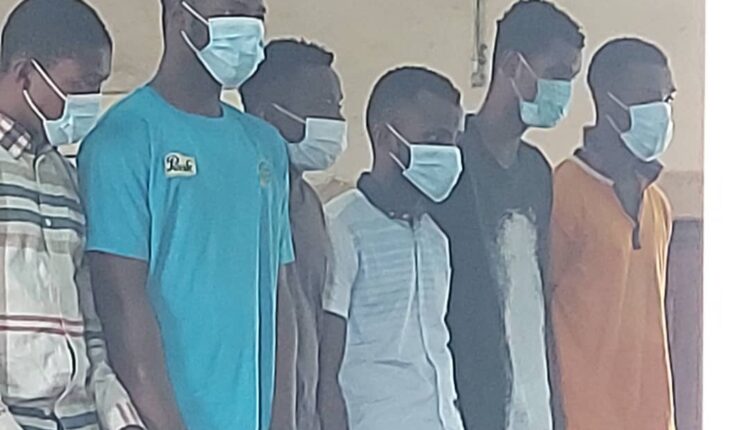 No fewer than 60 suspected members of different cult groups arrested by the Nigerian Police, Lagos Command could be sentenced to 21 years imprisonment following their arraignment before a Magistrate Court sitting in Yaba axis of the state

Aside from the suspected cultists under detention, each of the cultists’ parents could also be jailed for two years with an option fine of N500,000 for not exposing his child after discovering his actions.

The jail term for convicted cultists was stipulated by the Prohibition of Unlawful Societies and Cultism law 2021, gazetted by the state government about two weeks ago after the governor, Babajide Sanwo-Olu, signed the bill prohibiting cultism into law.

In fulfillment of the law, the 60 suspected members of cult different cult groups were arraigned before a Magistrate Court presided over by Adeola Adedayo on a thirteen-count charge bordering on Conspiracy, Murder, Cultism, Unlawful Possession of Firearms, and Breach of Public Peace.

The prosecuting officer, Yetunde Cardoso, told the court that the suspects committed an offense punishable under the Lagos State Anti Cultism Law, 2021 and Criminal Laws of Lagos State, 2015.

Explaining sections of the law, the Commissioner of police, Hakeem Odumosu, explained that the law provides that, on conviction, cult members be sentenced to 21 years, while their parents would be asked to serve two years jail term with an option fine of N500,000.

Odumosu, made the clarification in a statement released by the public relation officer, Olumuyiwa Adejobi, on Wednesday, disclosed that he coordinated some raids and operations around the state, especially, in Ikorodu Division of Lagos State.

The police boss for the state stressed that it was not that there were no capable hands to enforce the law across the state but to have accurate understanding of what often transpired within the communities and to fast-track their their prosecution.

Odumosu, who argued that the new law would help to eradicate cultism across the length and breadth of the state as the law caters to many loopholes in the previous laws pertaining to cult-related matters in the state.

He further appreciated the state government and the good people of the state for making the law a reality that is now applicable in the state.

The police boss, therefore, charged the Divisional Police Officers and commanders of operational units to be on their toes and make sure that the state is rid of cultism and other social vices since the command enjoys the enabling platform and framework to operate and discharge its duties as expected.