Film on Tinubu’s political history, others to hit… 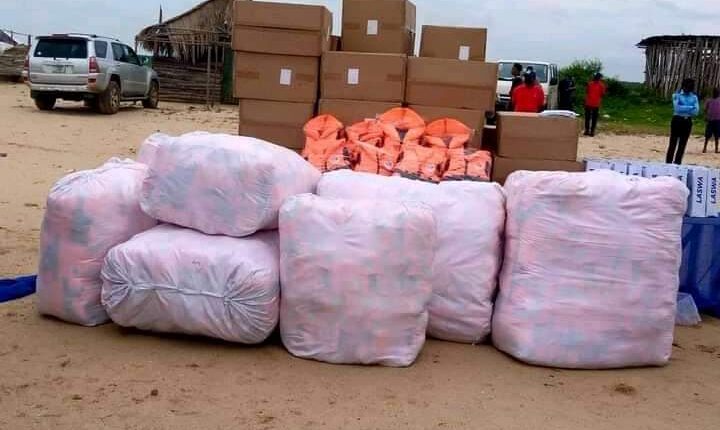 As an effort to improve safety on waterways, the Lagos State Waterways Authority (LASWA) has distributed over 500 life jackets to schoolchildren, boat operators, and market women across riverine communities in Epe Local Government.

The lifejackets were handed over to the beneficiaries at an event attended by Royal fathers, political leaders, riverine area school pupils, and other stakeholders in the water transport sector within the council.

Speaking at the event, the General Manager Lagos State Waterways Authority, Oluwadamilola Emmanuel; said through LASWA, the Lagos State Government has embarked on a series of policy reforms, programs, and investments to promote and facilitate water transport provision to realize its potential to become an attractive mode of transportation.

According to him, the Life Jacket Donation Exercise is one of the many programs that promotes and facilitates water transport.

He stated that LASWA embarked on this program to help the people of Lagos State, both old and young, cultivate the habit of wearing lifejackets.

“This is vital to the growth of water transportation by reducing fatalities on the waterways. He also urged boat operators to strictly adhere to safety guidelines and ensure no one can board their ferries without wearing a standard life jacket”, he added.

He told the gathering that Lagos State Government was very passionate about safety of lives and property, hence the provisions of the jackets to ensure safety on our waters across the state.

Emmanuel alleged that Epe Boat Operators were yet to partner his office, but because of the determination of LASWA to ensure safety and progress of Water transportation, the first distribution of the jackets this year was brought to Epe.

The General Manager said another way the agency proved that Epe is considered important in the state was the decision to distribute 500 (Five Hundred) out of the total of 3000 (Three Thousand) jackets got from the State Government this year.

Emmanuel, meanwhile, urged Boat Operators in Epe, whose population dominated the event to ensure they are duly registered with the agency and not just only looking for government’s assistance in time of challenges.

He, however, appealed to the beneficiaries to make use of the jackets; noting that the authority had done its part and now left for them to do theirs by making use of their jackets always while using waterways.

In his own remarks about the distribution, the Lawmaker representing Epe Constituency I, in the Lagos State House of Assembly, Abiodun Tobun, revealed that, having observed that the agency had distributed the jackets in other parts of the state without coming to Epe, he sent a letter to them to come and do the same thing for his constituents. He commended the organization for honouring his letter and doing the needful. He thanked Lagos State Government for continuing to perform wonders across all sectors of the state.

Tobun further revealed that very soon the Ferry Terminal he facilitated to Epe will commence operations fully and the travel time to Lagos from Epe would be very short and comfortable.

He, meanwhile, promised to distribute more jackets to residents, as his contribution towards improving safety on waterways, adding safety is very important to the State Government.

Earlier, the Vice Chairman of Epe Local Government, Sikirulahi Owolomoshe, opined that with the distribution, more convenience and safety measures have been provided for the people of Epe. He admonished all the beneficiaries to make use of the jackets provided for them by the government.

Owolomoshe also promised the Council’s collaboration with the LASWA to further make water transportation safe and attractive to the people. On the refusal of Boat Operators to cooperate with the agency, he said the Local Government will soon meet with them to foster the needed cooperation and compliance

Kaduna-Abuja rail attack: Our next priority