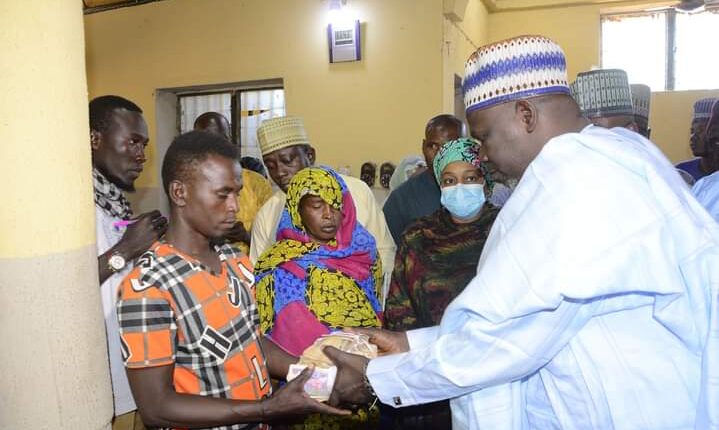 Share
The Borno State Government has handed over N600,000 and bags of food items as compensation to each of the 48 bereaved families of Zabarmari farmers slain by Boko Haram in Jere Local Government, central part of the state.
AS gathered, the funds expended and distributed, totaling over N28 million, came from Northern Governors’ Forum (NGF) and North-East Development Commission (NEDC) to assist the families quickly get over the agony.
The funds and food items came days after the state government handed over N200,000 to each family after the Governor, Babagana Zulum, inaugurated a committee to ensure transparently in conveying external donations to families and victims of the recent attack.
A total of 13,000 Bags of Rice, Maize, and Beans, 1,300 cans of vegetable oil, 2116 cartons of seasoning Cubes, 1083 Tomato, and 650 sachets of salts were donated by Federal Ministry of Humanitarian Affairs and Social Development for distribution to the families
At the presentation, the committee chaired by the state commissioner for youths and sports, Saina Buba, handed over the cash and food items to the families in Zabarmari yesterday, and was joined by a member of the house of representatives, representing Jere federal constituency, a member of Borno assembly representing Jere, two special Advisers, and chairman-elect, for Jere local government.
He noted that each family was to combine the N600,000 cash and food varieties not as compensation for the deaths of their loved ones, but to reduce hardship resulting from gaps in access to livelihoods created by the death of mostly male victims, who are breadwinners of those affected.