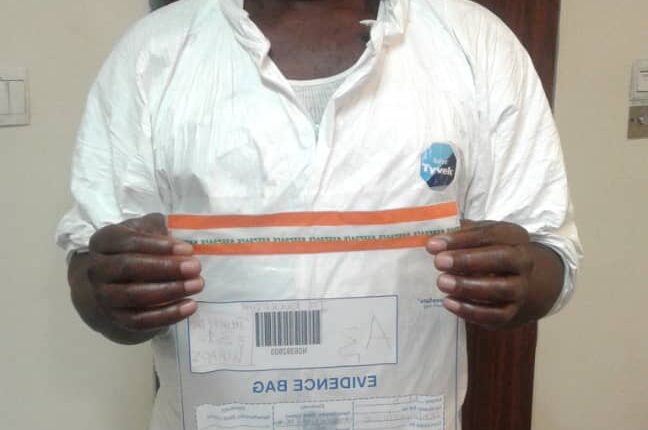 The National Drug Law Enforcement Agency (NDLEA) has nabbed a 47-year-old drug trafficker, Chigbogu Obiora who excreted a total of 97 wraps of cocaine weighing 1.55 kilogramme with a street value of N360million in Lagos State.

The suspect was said to have been arrested at the Murtala Muhammed International Airport, MMIA, Ikeja axis of the State, on Sunday 25th April 2021.

As stated, Obiora was apprehended by the National Drug Law Enforcement Agency (NDLEA) operatives during the inward screening of passengers on Ethiopian Airline from Entebbe, Uganda via Addis-Ababa, Ethiopia.

The NDLEA, Director, Media & Advocacy, Femi Babafemi, who confirmed the development said that after Obiora’s arrest, his scan results proved positive to drug ingestion. He said the suspects were subsequently put under observation for further investigation.

Giving details after excretion observation, the Commander, MMIA Command of the NDLEA, Ahmadu Garba, said that “Obiora was intercepted in the E-arrival hall of the airport by the operatives of NDLEA on the suspicion that he ingested drug substance.

“The suspect was taken for body machine scan and the result was positive for ingestion of substance suspected to be an illicit drug. The suspect was promptly moved to the NDLEA excretion/ observation facility.

“Barely an hour after Obiora was arrested, he excreted 31 wraps of cocaine weighing 500grammes and another 47 wraps (750grammes) in the evening of the same day while 19 warps (300grammes) were excreted the following day, Monday 26th April, bringing the total to 97 wraps, that is, 1.55kg.”

According to the MMIA commander, Obiora, when interrogated claimed the real drug owner promised to pay $1,500 if he successfully trafficked the drug, saying he opted for the deal because he needed money.

“I did it so that I will be capable of feeding my family. I was living in Madagascar but due to the COVID-19 and the lockdown in the country, I couldn’t go back to my place of work. There was a time I started lacking money to feed my family and to pay my children’s school fees and the worst part of it is to pay my rent. So, I decided to take the option to do it.”

“He said he never knew he could be arrested while stating that he has never met the real owner of the drug. I don’t know him, they contacted me on phone and asked if I can do the business, he claimed,” he added.

NDLEA spokesman stated further in a statement made available to newsmen on Friday that the Command had also arrested two drug dealers in Ondo state with 80.2kg of skuchies concealed in different joints.

“Meanwhile, in continuation of efforts to dismantle all drug spots in Ondo state, the state Command of the Agency has raided two joints, arrested two dealers, and seized 80.2kilogrammes of skuchies, while four hectares of cannabis farms were destroyed in Eleyewo area of Akure south local government.

“The acting Commander of the Agency in the state, Callys Alumona said a lady, 31-year-old Ibukunoluwa Kemi, and a 25-year-old young man, Oluwaseun Sunday were arrested with 78kg and 2.2kg of skuchies respectively. Both were nabbed in different areas of Akure south in the state capital.

Reacting to the latest drug haul, NDLEA Chairman, Brig. General Buba Marwa (Retd), commended officers and men of the MMIA, and Ondo state Commands of the Agency for the seizures and arrests.

Marwa further charged officers and men of the two command as well as other Commands across the country not to rest on their oars in the renewed efforts to rid Nigeria of illicit drugs.