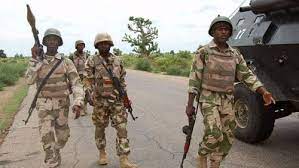 No fewer than 43 gunmen have died during the Nigeria Army and bandits clash in Plateau and Kaduna State.

The troops were said to have rescued 20 kidnapped civilians as well as recovered 131 livestock, 12 assorted arms and 36 different calibers of ammunition.

As disclosed through a statement released on Yesterday by the Acting Director, Defence Media operations, Benard Onyeuko, the Troops under Operation Safe Haven conducted various operations, including raiding on the criminal hideouts as well as repelled kidnappers and gunmen attacks at different locations across the states.

Onyeuko added that some of the operations were executed at: Bure as well as Mangu and Gindiri markets in Mangu LGA; Maraban Jama’a Checkpoint and Dogonahawa community in Jos South LGA; Maraban Foron and Kaskara forest in Barkin Ladi LGA of Plateau State.