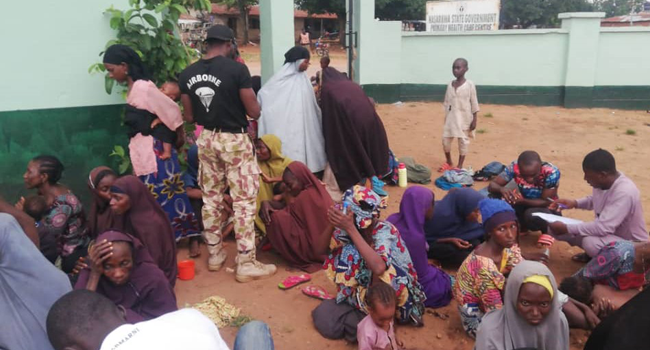 No fewer than 410  bandits have surrendered to  Nigerian Army under operation Whirl Stroke after an intensive kinetic operations carried out at the bandit’s clave in Nasarawa State.

The 410 bandits under Darul Salam terrorists group, include women and children, surrendered to the troops deployed at Uttu community in Toto Local Government Area of the state.

It was gathered that the bandits surrendered after the military intensified their operations towards addressing security menace in North-Central zone and end activities of criminals in the state.

In a statement through Coordinator of Defence Media Operations, John Enenche, and made available to newsmen on Thursday, he disclosed that the 410 bandits surrendered after troops stormed the groups  bomb-making factory.

Eneche opined that the success was made possible due to technical and human intelligence gathering on activities of the terrorists and that their camps were destroyed and troops started combing the area for fleeing members of the sect.

He further said that the Military hierarchy  commended the troop  for their professionalism and dexterity in achieving this notable feat as well urged them to sustain the tempo in the push to decisively curtail the activities of armed bandits and other criminals operating in the North-Central zone.