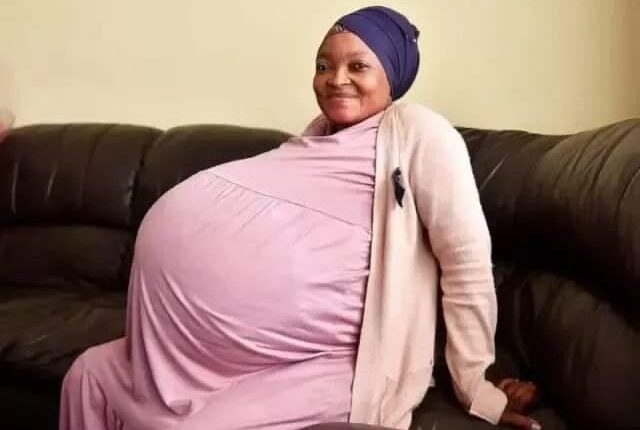 A 37-year-old South African woman, identified as Gosiame Sithole has set a new world record for the most children born in single birth by delivering 10 babies at once, according to media reports on Tuesday.

As gathered, the decuplets mother, a resident of Tembisa East in Johannesburg, welcomed her ten children of  7 boys and 3 girls on Monday, June 7th, 2021 at a hospital in Pretoria at 29 weeks of pregnancy.

According to the doctors, the ultrasound initially showed that Sithole would have six children, and another examination was conducted, which revealed that the number was 8 children, and in the end, Sithole gave birth to 7 boys and 3 girls.

Gosiame Sithole and her husband Tsotetsi were already parents to six-year-old twins and Tsotetsi is currently unemployed. However, after the decuplets were born, he reportedly told journalists at local media outlet Pretoria News that he is “happy” and “emotional,” stressing that he was lucky that God had blessed him with so many children.

He said: “It is seven boys and three girls. She was seven months and seven days pregnant. I am happy. I am emotional. I can’t talk much.”

Tsotetsi said her wife pregnancy was completely natural, and the delivery took place by Caesarean section.

According to doctors, such a birth is the result of fertility treatment with the introduction of several fertilised embryos into the uterus to increase the patient’s chances of conceiving.