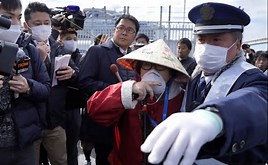 Thousands of passengers on board of a Hong Kong carnival cruise ship that was quarantined for Coronavirus have been allowed to disembark by Japanese Government 16 days after it was docked along its shores.

While in the cruise ship, thousands of the passengers confined themselves within its cabins in order to prevent spread of coronavirus within the ship and to Japan.

The cruise liner came under quarantine after a former passenger had been diagnosed with the virus in Hong Kong, which had resulted in Japanese authorities searching out all who had been on the ship and confining them to their quarters for observation and treatment.

It was gathered that the ship had biggest concentration of coronavirus infection outside China, as it had more than 540 passengers already infected with the virus, out of about 3,700 passengers and crew that had been on board at the time of quarantine.

Japan Health Minister, Katsunobu Kato, who confirmed the development, explained that the passengers and crew members were allowed to disembark after testing negative during a daily random test conducted within the ship during the 16 days.

According to him, Due to this, the government decided that they should be allowed to disembark on Wednesday, at Yokohama region of Tokyo, where the ship had been docked.

Kato added that that though death toll from the coronavirus had passed 2,000 in mainland China, a reduction in number of new cases had been recorded for two consecutive days, and that such was an indication that the epidemic had peaked and was now on decline.

He disclosed that those that tested positive to the virus have been transferred to hospitals for proper care and treatment, expressing optimism that everyone would soon regain their health and be released back into society.

While addressing growing criticism over government’s response to coronavirus outbreak, the minister stated that decision to quarantine the carnival luxury liner was been taken in best interest of citizens and residents of Japan in order to prevent it from spreading.

“Unfortunately, cases of infection have emerged, and we as Government had to do our best to keep ot under control. Therefore, we had to the extent possible taken appropriate steps to prevent serious cases by isolating possible carriers till we were sure they were not infected, and sending infected people to hospital. All that has been done is to safeguard health of all people in Japan”.

The Guild gathered that about 500 passengers and crew members are scheduled to disembark the ship.