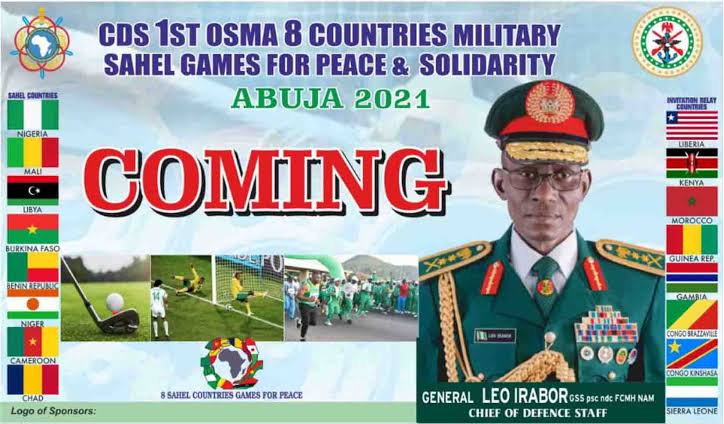 No fewer than 327 military athletes from 14 African countries from Sahel region would converge in Federal Capital Territory (FCT) Abuja to participate in the maiden Chief of Defence Staff/Organisation of Military Sports in Africa (OSMA) tournament.

The OSMA President, Brig.-Gen. Maikano Abdullahi, said the game was aimed at fostering peace and solidarity among the eight Sahel countries that were mostly affected by activities of extremists and insurgents.

Abdullahi who announced this at a news conference in preparation for the maiden edition of the games themed: “Sahel Countries Military Games for Peace and Solidarity”, said that the tournament was designed with the aim of promoting peace and friendliness among the participating armed forces in the Sahel region.

According to him, if you could remember in my campaign promises after I won the election, I suggested that we are going to have Sahel military games.

“The CDS has approved the hosting of this game and asked my organisation to carry out all the necessary activities so that we can achieve our dreams. We sent invitation to about eight OSMA countries and the event we proposed to be completed for is golf, football and marathon race.

“We are going to receive contigents from about 14 countries and these countries will start coming from the night of Saturday and will all arrive in Abuja on Sunday.

“The opening ceremony is going to be on Oct. 11 while from Tuesday to Friday will be competition where football and golf will take place.

“This time around is going to be full marathon that’s 42.95 kilometres and 10 counties are participating in this marathon championship including Nigeria,” he said.

Abdullahi said that only Kenya would be participating in invitational relay race with invited participants from the sister security agencies.

He said that the procedure for winning medals was that those who come first, second and third in football would be given Gold medal, Silver and Bronze likewise in the golf and also in the marathon.

According to him, in marathon, there won’t be team champion but individual from first , second and third but there will be consolation prizes up to sixth position. There will be peace trophy that is going to be given to all participants from all the 14 countries,” he said.

Abdullahi gave assurance that adequate preparations had been made to ensure a successful and hitch free tournament, adding that the competition would be held annually going forward across member countries.