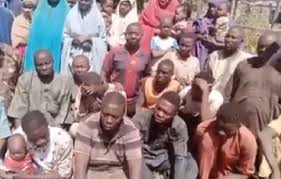 The 30 passengers abducted by bandits onboard Niger State Transport Authority (NSTA) bus have regained freedom following the state government and security agencies’ intervention after their kidnap.

As gathered, the 30 passengers aboard the NSTA bus were released by their abductors in Zamfara state, barely seven days after their bus was attacked by bandits

Announcing their release on Sunday, the state governor, Sani Bello, in a short statement on his official social media handle, said that the government secured their rescue from their abductors.

Bello said: “We are pleased to announce to the general public the release of the NSTA passengers abducted a week ago while returning to Minna along the Minna-Zungeru road”.

The Chief Press Secretary to the governor, Mary Noel-Berje, added that the abductees were rescued around Zamfara state and were on their way to Niger state.

Although she, however, did not give details on how the government secured their release, the rescue came seven days after gunmen kidnapped the travellers along the Tegina-Zungeru highway in Rafi Local Government Area of Niger State.

Officials of the drivers union in the area said the victims were travelling in a bus of the NSTA when they ran into an ambush laid by the bandits that latered killed three members of the local vigilante group which attempted to foil their operation.