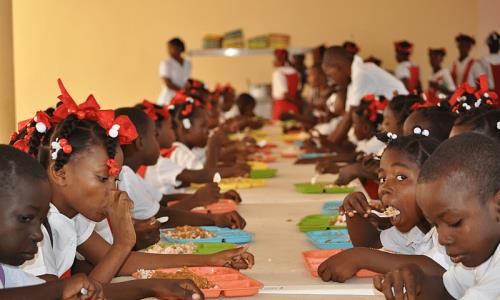 The Federal Government has announced that it will begin the home school feeding programme in the Federal Capital Territory, Abuja, on Thursday, saying over three million families will benefit from the intervention.

It explained that the beneficiary of the intervention are put at 3,131,971 households of children in primary 1 to 3 in public schools, adding that each household will receive uncooked food items valued at N4, 200.

Recall that President Muhammadu Buhari had, during his first broadcast in March, directed the Ministry of Humanitarian Affairs, Disaster Management and Social Development to work with relevant state governments in developing a strategy on how to sustain the school feeding programme despite the closure of schools.

The move, he said, was part of his administration’s measures to cushion the impact of the novel virus and lockdown on vulnerable households, adding that such initiative would help families stay indoor and maintain social distancing to mitigate the spread of the pandemic.

Acting on the President’s directive, the Minister of Humanitarian Affairs, Disasters Management and Social Development, Sadia Umar-Farouk, on Tuesday, said the intervention will commence in Lagos and Ogun states shortly after FCT before it kicked off in other states of the federation.

The Minister, through a statement by the ministry’s Deputy Director of Information, Rhoda Iliya, revealed that the ration of the food items contains a 5kg bag of Rice, 5kg bag of beans, 500ml vegetable oil, 750ml of palm oil, 500mg of salt, 15pieces of eggs, and 140gm of tomato paste, adding that the packaged had been assessed and approved by nutrition experts as sufficient for the children.

According to her, no fewer than  6,000 schools are expected to serve as distribution centres for clusters of communities, saying identified households will access ration from the distribution centre with vouchers which are QR coded, serialized as well as dated and time-stamped.

“The Ministry in consultation and collaboration with state governments identified the distribution of Take-Home Rations (THR) to the households of the children on the programme as a feasible method of achieving this directive after exploring several options.

“This is a globally accepted means of supporting children to continue to have access to nutrient-rich foods despite disruptions to the traditional channels of school feeding.

“The Ministry has requested states to carry out mapping exercises in order to trace the households of the children using all available data sources including the School-Based Management Boards, community focal persons, cooks on the programme and most importantly existing school registers in the LGAs where the schools are domiciled, which is the primary source of data of beneficiaries used by the National Home Grown School Feeding Programme (HGSFP).

“As a second level of verification, the door to door voucher distribution process will be used. The provision of Take-Home Rations will, therefore, be carried out based on data provided and structures put in place by the HGSFP over the years, with the Federal Government providing funds to the States for implementation,” the statement said.

She revealed that based on concerns raised from some sector demanding for transparency, the Ministry will be deploying resources to provide oversight for the distribution processes to ensure accountability, adding that the ministry has requested agencies of government including the DSS, EFCC, ICPC, Code of Conduct Bureau, and a host of NGOs and CSOs to monitor the process.

The Minister also urged state governments to deploy security agents to ensure the safety of beneficiaries, sensitize the communities and programme personnel on the need to ensure that the intervention reaches the intended beneficiaries, and facilitate the timely delivery of quality food supplies provided by the state aggregators.