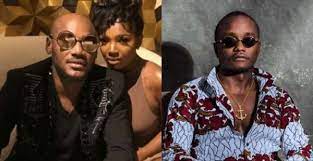 The ongoing face-off between multiple awards winning Nigerian artiste, Innocent Idibia, popularly called 2baba, and his colleague, Olawale Ashimi, also known as Brymo, has further gone worse with 2baba preparing to drag him before a court over alleged defamatory comments.

2baba has also directed his lawyers to request N1 billion as a claim for the alleged damage done to his reputation should Brymo decline to refute statements made on him and 2baba family publicly as well as apologies for his actions on his colleague.

Meanwhile, Brymo has also directed his counsels to prepare his defense, saying he was not prepared to backtrack on the comments made on the artiste.

Through a statement released on Thursday via his social media handle, Brymo confirmed the receipt of 2baba’s request and threatened to sue him for his comments.

Brymo shared a screenshot of the letter delivered to him by 2baba’s counsel, barely two days after allegedly that 2baba accused him of sleeping with his wife and that his colleague sent thugs to beat him up.

Although 2baba has kept mum about the allegation and was yet to make any comment on the allegations leveled against him by his colleague.

Brymo said: ” I have received this from Innocent Idibia’s lawyer’s, or so it reads… I’ll advise they go to court, as I insist on all my tweets asserted… they are not ‘nonsense’”.

The letter sent to Brymo reads, “We are solicitors to Mr Innocent (2baba), hereinafter referred to as “our client” and on whose instruction we write.

“Your publication on Twitter that our Client “falsely accused you of sleeping with his wife,” and that our Client “was responsible for the attack” on your person, which attack “was for supposedly bedding his Mrs or for claiming the spot of the greatest artiste alive,” amongst other similar false allegation have been brought to our Client’s notice.

“The baseless and false accusation has caused unspeakable distress to our client and his family. You have also caused estimation to be lowered in the estimation of his friends, business associates and wilder members of the public and further caused him a significant loss of business”.