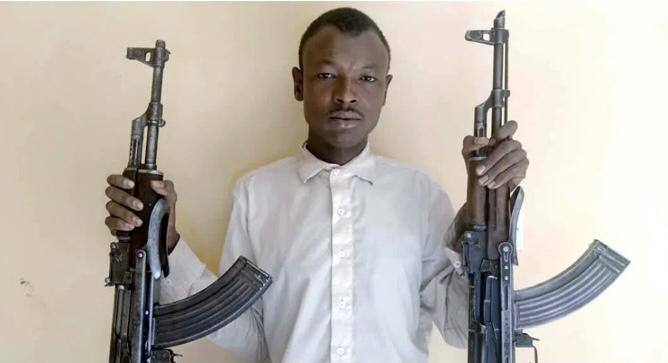 The Nigerian Police, Kano Command has arrested and detained a 27-year-old man, identified as Abubakar Musa, for allegedly kidnapping his uncle, obtain ransom, and staged other series of criminalities across the state.

Musa, who was arrested by the law enforcement personnel attached to operation Puff Adder, was reported to have been in possession of two AK-47 rifles he allegedly used for his criminal operations in the state.

The suspect, popularly called Likita by his admirers in the Birnin Gwari axis of the state, was said to often abduct residents of Kaduna, Kano, and some other northern states.

Musa, an indigene of Rurum village in Tudun Wada Local Government Area of Kano, abducted his uncle and collected ransom before releasing him.

During an interview with newsmen, the suspect, a father of six, confessed to being a cattle rustler, who had engaged in kidnapping twice before the arrest.

“I am a cattle rustler. I once abducted my uncle Alhaji Haruna and my cousin Bappan Jauro six years ago. These are the only two persons I have ever abducted. I abducted him (Alhaji Haruna) because his two children (Medi and Bappan Jauro) had kidnapped my younger sister, Hafsat.

“I released him after receiving one million naira ransom. We are now living with him (Alhaji Haruna) in the same compound,” the suspected kidnapper added.

According to him, the two AK-47 rifles and ammunition recovered from him were obtained from the children of one late Muhammadu Bakanoma in Zamfara State.

Confirming the arrest to newsmen, the Police Public Relation Officer (PPRO), Abdullahi Haruna, explained that the suspect, who was apprehended following a tip-off, was currently been interrogated to obtain his operational modes.

Haruna said Musa would soon be charged after the investigation on his alleged crimes was concluded.