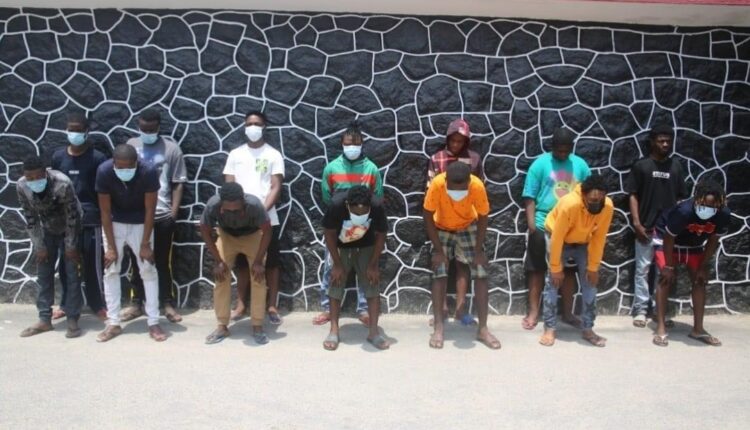 At least, no fewer than 27 suspects, most of which were young men, have been arrested by Economic and Financial Crimes Commission (EFCC)  both in Abuja and Lagos, for involving in various internet frauds, said to have been capable of damaging Nigeria image. 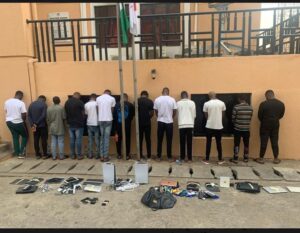 Confirming the arrest, EFCC’s Head of Media and Publicity, Wilson Uwajaren, in a statement disclosed on Thursday stated that their arrest followed series of intelligence on alleged Internet-related crimes of the syndicate.

Uwajaren listed the item recovered from the 13 unnamed cybercrime suspects in Abuja to include iPhones, laptops, gaming consoles, 1 Toyota Avalon, and a Lexus SUV. 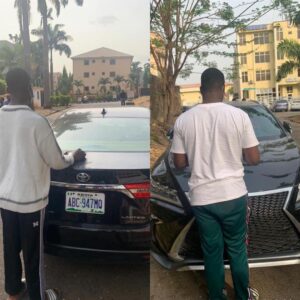 Meanwhile, No fewer than four suspected oil dealers have been detained by the Economic and Financial Crimes Commission (EFCC) over alleged involvement in illegal petroleum products.

As gathered, the suspected oil smugglers, who were all male,  were said to have been apprehended by the Nigerian Navy Base.

According to the statement, the suspects were arrested in two separate operations along Effiat Waterways, Ibaka.

Also, the statement stated that the Commander of the Nigerian Navy Base, J. Shenu, handed over 35 (300 litres capacity) drums of suspected premium motor spirit, PMS; two wooden boats and one fibre boat recovered from the suspects to the anti-graft agency Uyo Zonal Office.

As gathered, two of the four suspects, Yomi Omoshola and Fayowola Ogunfunyi were arrested with twenty-six (300 litres capacity) drums of petroleum product suspected to be PMS, popularly known as petrol, on-board two locally made wooden boats.

While  Japheth Pius and Ofonime Eniefiok were apprehended with nine (300 litres capacity) drums of suspected PMS, conveyed in a fibre boat on an outward sail to Cameroun.

The statement further disclosed that DDS Abubakar Musa received the suspects along with the boats and the products on behalf of the Commission for further investigation and possible prosecution in accordance with the country’s constitution. 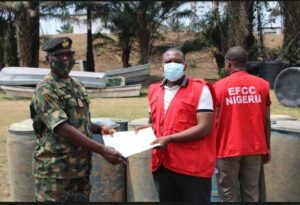 Meanwhile, the Zonal Head of the commission’s Gombe Office, CDS Ibrahim Shazali, had warned Nigerian young stars to desist from any online activities considered to be illegal and adopt jobs that are honorable.

Speaking earlier at the unveiling of legacy project by members of the EFCC and National Youths Service Corps (NYSC) Integrity Club, Shazali advised entire members of the group and youth across Nigeria to support the agency by shunning all forms of criminalities and remain law-abiding citizens.

“Youths as the greatest assets of every society as they are good measures of the extent to which a country can produce or sustain itself,” he said. 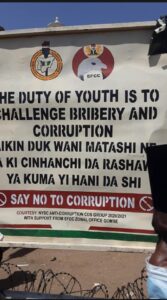 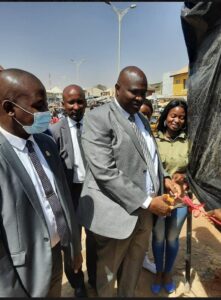