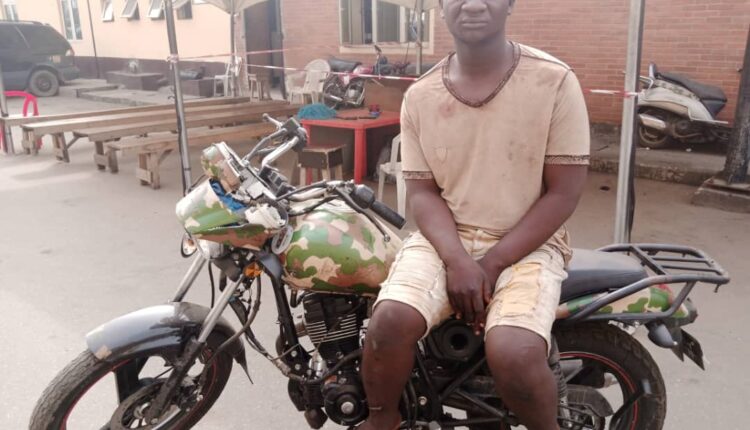 A 25-year-old motorcyclist, Kabiru Mohammed, has been sentenced to six weeks imprisonment by the Lagos State Mobile Court for impersonating the Nigerian Army and attacking other law enforcement agencies in the state.

Mohammed, an indigene of Kano state, was found plying restricted route with his bike painted in Nigerian Army camouflage in Lagos when policemen attached to the State Environmental and Special Offences (Enforcement) Unit (Taskforce)  accounted him and impounded the motorcycle for contravening the law.

In order to retrieve his motorcycle from the law enforcement agency, he was reported to have mobilised some miscreants at Airport Bus-stop along Lagos-Abeokuta Expressway and attacked the taskforce officials but they were overpowered by the enforcement team.

At weekend, the Taskforce arraigned Mohammed before the Mobile Court on a three-count charge bordering on assults, conduct likely to cause breach of peace and for impersonation.

After the three-count charge was read and interpreted to him in the language he understood, the Kano indigene pleaded guilty to the charges and appealed for leniency from the magistrate.

Delivering judgement, Magistrate Oyebimbola Adelakun, after listening to the defendants plea, sentenced Mohammed to six weeks jail term with N40.000 as an option of fine to serve as deterrent to others planning to embark on such action.

Earlier, The Taskforce Chairman, Shola Jejeloye, who urged members of the public desist from impersonating security agents and committing crimes as anyone apprehended would be prosecuted in accordance with the law, said that arraignment of the fake Soldier was in compliance with directive of Lagos State Commissioner of Police, Hakeem Odumosu.

Jejeloye explained that the agency personnel were returning from a monitoring and enforcement operations with over 150 impounded motorcycles loaded into three of its trucks before the fake Soldier, whose commercial motorcycle was among those impounded for plying restricted routes, mobilised other miscreants and attacked the team with dangerous weapons such stones, bottles and iron-rod.

The chairman, in a statement made available to journalists by Head, Public Affairs Unit for the agency, Adebayo Taofiq, explained that the fake Soldier was subsequently arrested after the attack and during investigations taskforce headquarters, it was discovered that he was an impersonating the Nigerian Army.

“The man later confessed to having only claimed to be a Soldier in order to retrieve his impounded commercial motorcycle and that he painted his motorcycle with Nigerian Army camouflage in order to evade arrest from security agents while engaging in commercial activities on restricted routes”, he added.