Nigeria: ‘The Beginning of the End’ 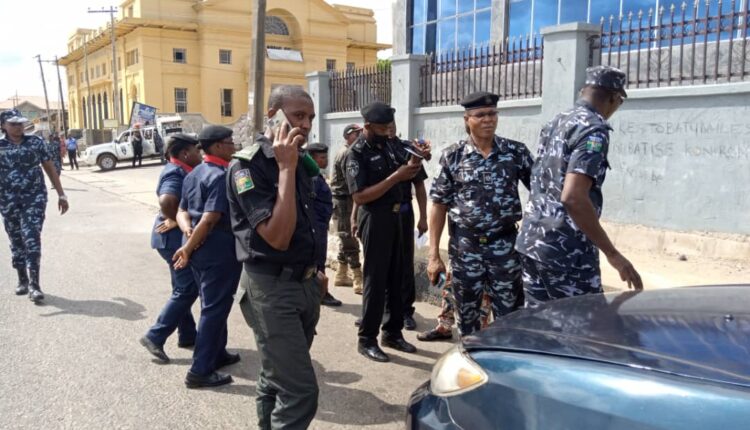 No fewer than 25 pro-Yoruba secession activists have regained freedom from the Nigerian Police custody, hours after their arrest by the law enforcement agency for embarking on procession in Abeokuta, Ogun State.

They were released by the law enforcement agency after dozens of other demonstrators marched down to the Eleweran, the Police Headquarters in the state.

Among those arrested during the procession targeted at emphasising the clamour for a Yoruba nation was Zannu Williams, a young man who wore traditional regalia during the demonstration that lasted for several minutes.

They were said to have been arrested by the law enforcement agency on Saturday after defying the police ban on mass rallies across the state capital, Abeokuta.

Before the arrest, the security operatives, eyewitnesses said, had taken over the streets of Abeokuta in order to stop the rally as early as 7 am including helicopters that were hovering across the state.

Some of the strategic locations occupied by the law enforcement agency include Alake of Egba’s palace, venue of the rally, which was occupied by a joint security operative.

However, in spite of the law enforcement agency’s personnel presence, a procession of the Yoruba nation agitators, in defiance, passed through the venue, despite the presence of heavy security men. With solitary songs blaring from the speakers attached to the moving vehicles, the procession comprising young men and women, headed towards Adatan area of the metropolis.

Confirming their release, Media and Communications Secretary, Ilana Omo Oodua, Maxwell Adeleye, said that the Nigerian Police has obeyed the will of the people of Yoruba Nation and has released the demonstrators.

Adeleye said: “As the policemen saw the surging crowd of Yoruba men and women moving towards Eleweran Police Headquarters in drove, they quickly released our comrades protesting for Yoruba Self-Determination.

“It is very important to thank Police Officers who are Yoruba Indigenes for refusing to let the Hausa-Fulani Officers among them torture our patriots”, the spokesman added.

Earlier, the Spokesman of the Command, Abimbola Oyeyemi, in a statement said the proponents of the Yoruba nation had held series of rallies in the different parts of the State, but the command would not perpetually stand by and watch public conducts of some citizens “hold others to the ransom and threaten the corporate existence of the country.”

He said: “The Command therefore, wishes to appeal to the leaders of this group to shelve the idea of staging another public rally in any part of the State for now, as such is capable of undermining the relative peace being enjoyed in the entire State.

“Consequently, the rally slated for Abeokuta on 1st May, 2021, is viewed by the Command as one too many in the State, and therefore not approved.

“Parents and guardians are hereby advised to warn their children and wards not to be involved in any of such gathering that may expose them to violence and consequently bring them on a collision course with the security agencies.”