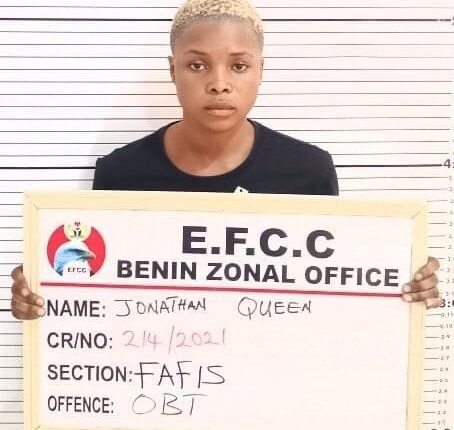 The Economic and Financial Crime Commission (EFCC) has arrested a 24-year-old lady, Queen Jonathan, for her alleged involvement in an internet scam.

As gathered, the suspect was said to have been arrested by personnel attached to the anti-graft agency’s Benin Zonal Office in Oghara, Delta State.

Uwajaren, in a statement made available to newsmen yesterday, listed items recovered from the suspects to include an Infinix Hot 8 mobile phone,

The EFCC spokesman added that the suspects have made useful statements and would be charged to court as soon as the ongoing investigation was concluded.