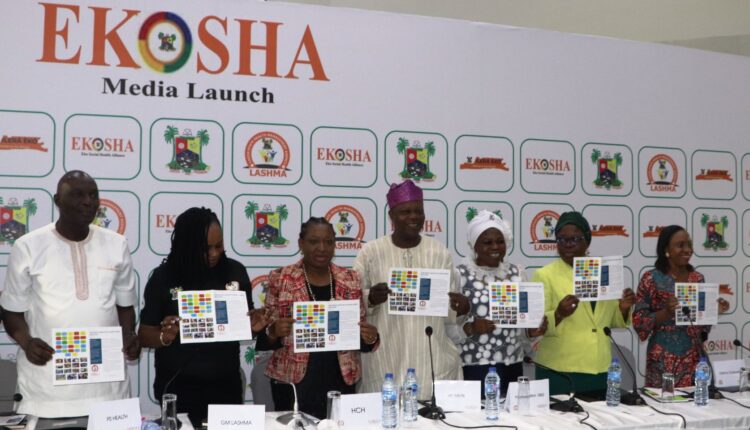 Over 230,000 indigent and vulnerable residents of Lagos, including; members of elderly and orphanage homes, vulnerable persons living with HIV/AIDS, Tuberculosis, Sickle cell Anaemia, and victims of domestic and sexual violence spread picked across the state have been freely enrolled and benefitting from the Lagos health insurance scheme.

The health insurance beneficiaries were said to have been sponsored by the state government under the Eko Social Health Alliance (EkoSHA).

The Commissioner for Health, Prof. Akin Abayomi, who disclosed the statistics at the media launch of EkoSHA in Ikeja, explained that EkoSHA, an initiative of the Lagos State Stat Government was in an alliance with private institutions, public institutions, development and multilateral partners and individuals seeking the good of all residents of Lagos.

He said: “The initiative is designed to mobilize adequate funds to help the identified vulnerable residents of Lagos state access health insurance through the Ilera Eko Social Health Plan under the Lagos State Health Scheme (LSHS). EkoSHA will also provide access to social welfare empowerment programs so that beneficiaries do not only have health insurance but are provided opportunity and support that will gradually lift them out of poverty”.

Abayomi who was represented by the Director, Medical Administration, Training and Programs in the State Ministry of Health, Dr. Funmilayo Shokunbi further explained that the alliance, in addition to mobilizing more funds to help the identified vulnerable Lagos state residents access health insurance, will also collaborate with different departments and agencies engaged in social welfare empowerment and poverty alleviation programs so that beneficiaries do not only have health insurance but are provided opportunity to enhance their ability to attain sustainable livelihood.

“EKOSHA will collaborate with Social Welfare and Empowerment MDAs/ Organisations to provide a means of livelihood for these beneficiaries such that they do not remain dependent and can eventually afford to pay health insurance premiums for themselves”, he said.

Abayomi noted that the Lagos State Governor, Babajide Sanwo-Olu graciously approved 1% of the State’s Consolidated Revenue Fund (CRF) as an equity fund to pay for residents who cannot afford to pay for health insurance for themselves in order to ensure that Lagos State residents, including its vulnerable population, have access to the state health scheme.

He said: “The Lagos State Government continues in giant strides towards the Sustainable Development Goals and especially the Universal Health Coverage (UHC) journey of the State. This is evident in the various empowerment schemes, especially through the agricultural sector, the housing schemes, the health sector improvement, transportation, and other infrastructural development under the leadership of Governor Babajide Sanwo-Olu”.

The Commissioner disclosed that since the commencement of access to care for the vulnerable residents on the ILERA EKO Social Health Plan in 2020, a total of N750 million had been disbursed as equity fund in addition to the Basic Healthcare Provision Fund (BHCPF), and sponsorships from a few individuals and organizations; to provide health insurance for the vulnerable residents of the State.

While noting that the media launch programme is intended to raise the level of public awareness for EkoSHA initiative to stir up a positive reaction in the minds and hearts of well-meaning Lagosians and Nigerians to raise funds to pay for the health insurance coverage of millions of vulnerable residents of the State, Abayomi called on philanthropists, well-meaning people and organisations to key into the alliance and contribute their quota in their various capacity.

“This is a laudable one and we must not relent till the goals and objectives of EKOSHA are met. It is also our aspiration that these efforts will improve the health indices of Lagos State. As an administration, we will be unrelenting in pushing the frontiers of innovative financing for healthcare in Lagos State till we build a healthcare system that works for all”, the said.

Speaking in the same vein, the Permanent Secretary, Lagos State Ministry of Health, Dr Olusegun Ogboye who was represented by the Director, Diseases Control, Dr. Rotimi Agbolagorite noted that the objective of the EkoSHA initiative is anchored on mobilizing additional funds through a strategic alliance with suitable financial institutions leveraging on a crowdfunding financing model to provide more funding options for the health care of the vulnerable residents of Lagos.

According to him, other objectives of the initiative include, urging funding partners and facilitators like banks, local and international donor agencies, corporate bodies, religious organizations, NGOs, and high-net-worth individuals to register for the adoption of vulnerable residents by paying premiums for their healthcare coverage and providing a social safety net for beneficiaries through access to the state’s numerous empowerment programs.

Ogboye explained further that the initiative targets the vulnerable and indigent persons as defined by the LSHS Law which includes members of the Lagos State Social Register (LSSR), vulnerable persons living with special conditions such as Tuberculosis, HIV/Aids, Sickle Cell Anemia and Lupus, victims of sexual and domestic violence, teen moms, members of Destitute, Orphanage and Elderly Homes as well as other vulnerable groups as determined by LASHMA.

While commending the Governor of Lagos and the First Lady of Lagos State, Dr. Ibijoke Sanwo Olu, for their passion and commitment to ensuring that indigents, domestic and sexually abuse vulnerable live a good and healthy life, the Permanent Secretary stated that the State government is always open to collaborations from everyone who has the interest of the vulnerable and indigent people at heart and can partner with the government to sponsor beneficiaries in any of the three EKOSHA ACE Model of adoption, crowdfunding and events model designed to raise additional funds for the healthcare of the vulnerable and indigents in the State.

“I would like to commend the Governor of Lagos State, Mr. Babajide Sanwo-Olu, who aside from ensuring that the vulnerable and indigents in the State enjoy ILERA EKO, also personally enrolled some of the vulnerable in the State. Similarly, I commend the First Lady of Lagos State, Dr. Ibijoke Sanwo-Olu, for her passion and commitment to ensuring that the indigents, domestic and sexual abuse vulnerable live a good and healthy life”. He said.

The General Manager, LASHMA, Dr. Emannuella Zamba in her remarks assured that the agency remains committed to ensure that equal opportunity is given to those who cannot afford to pay the ILERA EKO premium in line with Section 20 of the LSHS Law, which stipulates that the Agency should ensure the availability of alternative sources of funding to the health sector for improved services.

“Let me buttress that EkoSHA was formed to increase vulnerable coverage on the Lagos State Health Scheme to complement Government effort and resources as well as collaborate with Lagos State MDAs and organizations in charge of skill acquisitions, social welfare, and empowerment programmes so that apart from enjoying ILERA EKO, they can equally acquire skills, stand on their own and become employers of labor. This, of course, will go a long way in making life meaningful to the vulnerable and indigents in our society”, She said.

Zamba appreciated various donors and developmental partners, organizations, political leaders, Nigerians in diaspora, non-governmental organizations (NGOs), and eminent personalities who have contributed in no small measure to help achieve the objective of EkoSHA.

“We also appreciate our collaborative MDAs which have supported us in this journey of ours. I implore Gentlemen of the Press to please publicize our contact details as this is a service to humanity. We will also invite you next year for our EKOSHA Fund Raising Event”, the general manager stated.

One dies, four injure during accident in Lagos