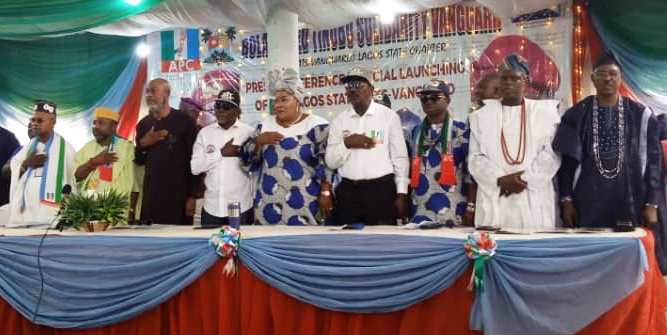 Ahead of next month’s commencement of campaigns for the 2023 general election, Local Government chairmen of no fewer than 22 states have declared their readiness to canvass and mobilise electorates toward casting their votes for the presidential candidate of the All Progressives Congress (APC), Bola Tinubu, in order to ensure that he wins the election and succeed President Muhammadu Buhari.

Aside from them, a group of individuals from different fields across the country and abroad under the aegis of Bola Ahmed Tinubu Solidarity (BATS) Vanguard, have also announced their readiness to engage and educate everyone across the country to benefits that awaits Nigeria should Tinubu becomes the country’s leader.

They declared their total commitment to ensuring that Tinubu becomes the next president on Thursday during an official launch of BATS Vanguard, led by its Global Chairman, Dr. Dare Owotomobi, with the state chairman being Otunba Dengel Anifowoshe, in Ikeja.

The Association of Local Governments of Nigeria (ALGON) president, Kolade Alabi, announced the plans of the council chairmen and indicated plans talks were already at an advanced stage for more councils to declare their support for the candidacy of Tinubu and campaign for him within their respective councils.

Alabi noted that Nigerians should be grateful to Tinubu for deciding to come forward and lead the country because he would be coming to spend his time and energy that could have been used elsewhere but he has declared to work for Nigeria.

The ALGON president stressed that the APC candidate remained the only candidate that his home practiced what many could not allow within their homes, giving his children and wife the opportunity to practice their religion without compelling them to become Muslims.

According to him, we at the local governments would be pleased to identify with you. We would be pleased to work with you, our hands would tie together, and we would join hands together with you to see Asiwaju Bola Ahmed Tinubu become the next president of Nigeria in next year’s presidential election, to steer the ship of the nation.

Earlier, the state chairman of the group, Anifowoshe, said that Tinubu emergence would unite everyone irrespective of their ethnic groups together, to achieve the best for the country.

He stressed that Tinubu, while serving as Lagos governor, practiced the principle of equity, justice, and fairness, which promoted growth and development within the state.

Anifowoshe maintained that the issue of religion should not be the focus at this point in time, saying that the APC flag bearer was not a “religious bigot neither an ethnic segmented leader,” even as he noted that he was married to “a devote Christian and live happily under the same roof.

The party chieftain, while also throwing support for the state governor, Babajide Sanwo-Olu, said his performance in office in less than four years demonstrated his high-level proactive acumen and administrative competence.

According to him, the governor’s “advocacy for continuity apart from his achievements could be inclined to his ability in finding satisfaction; if only in the completion of laudable commitments of his predecessors rather than building a cartel of hypocrites and digging unnecessary trenches,” calling on Lagosians to rally the governor and vote him again, come 2023 to enable him to continue his good work for the state.

“In this narratives however, we give kudos to his unbeatable capability for a glaring sustainability of a Lagos State that is beyond the common standard of excellence,” Anifowoshe said.

The Global Chairman of the group, Dr. Owotomobi, described Tinubu as a youth developer, saying the former Lagos State governor had solutions to problems facing the country if voted as the next president of Nigeria, in come 2023 General Elections.

Owotomobi, who noted that the APC presidential ticket was already giving headache to the opposition platforms in the country, tasked the BATS Vanguard members not to relent in their efforts until Tinubu was voted in 2023 as next Nigeria’s president, just as he further the former Lagos State governor as a “symbol of peace, development, and progress.